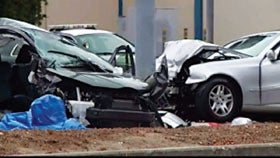 Also killed in the early morning crash was Carmen Savala, 63, who was driving a 2012 Toyota Yaris at around 3:15 a.m. Monday, Sept. 2, according to San Jose Police. Savala, a Hispanic, and Castro were on their way to the Mineta San Jose International Airport where they work as cooks for eateries managed by HMSHost Corp.

San Jose PD officer Albert Morales told FilAm Star that there has not been any significant breakthrough in their investigation nine days after the fatal accident near the intersection of Skyport Drive and North First Street.

Morales said that the driver of the abandoned Mercedes, believed to have fled on foot after broad-siding the Yaris, remains at large.

Minutes before the crash, two California Highway Patrol officers spotted the Mercedes speeding and weaving on northbound US Highway 101 and followed the vehicle for a traffic stop, CHP spokesman Chris Falkowski said.

Falkowski told CBS News the officers followed the Mercedes as it exited on the Brokaw-First Street off-ramp and activated their emergency lights.

The Mercedes then turned left on Brokaw Road and pulled over to the right shoulder appearing to yield to officers but instead accelerated southbound on North First Street, running a red light, Falkowski said.

The CHP officers aborted the pursuit and deactivated their emergency lights for safety reasons at Matrix Boulevard because of the busy city streets and the presence of several hotels and eateries in the area.

Police said the impact of the collision was so strong the women were killed even though the car’s air bags were deployed.

Police spokeswoman Sgt. Heather Randol said the Toyota was so badly damaged that police at first could not verify its make and model.

Randol said police obtained registration information from the Mercedes and are now tracking down the driver.

She said driver could be charged with felony hit-and-run for leaving the scene of accident.

Meanwhile, the SJPD and the CHP are urging anyone who may have seen the crash or have information on the identity of the Mercedes driver to call (408) 277-4654 or at http://www.svcrimestoppers.com.

The victims’ employer, HSMHost Corp., expressed support and condolences to the families of the deceased.

“We are deeply saddened by the loss of Cristina de Leon Castro and Carmen Maria Zavala. Our thoughts and prayers are with their families at this extremely difficult time,” said company spokeswoman Sarah Cody. “Cristina and Carmen will be truly missed by their HMSHost family.”

Read Next
Hitting the bull’s eye of success
EDITORS' PICK
DOH says COVID-19 cases plateauing, but public shouldn’t be ‘complacent’
Look Through: The fate of impounded stray dogs
House energy committee chair Arroyo bats for cheap electricity
23,000 cops to be deployed nationwide for school reopening
Unleash the photographer in you this World Photography Day with vivo smartphones
What to watch out for when selecting a video surveillance solution
MOST READ
Sharon Cuneta asks for prayers for friend in ICU who suffered silent stroke
Light therapy could be the answer to your sleep problems
Korina Sanchez reunites with former ABS-CBN co-anchors Julius Babao, Cheryl Cosim
Solons file resolutions seeking probe on ABS-CBN, TV5 merger
Don't miss out on the latest news and information.