Waste firm’s CEO nabbed in US 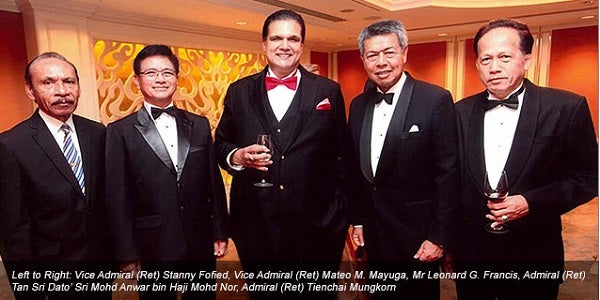 Leonard Glenn Francis is shown in middle together with officials of Glenn Command Group PHOTO FROM GLENNMARINEGROUP.COM

SUBIC BAY FREEPORT, Philippines—The chief executive officer of a controversial US Navy contractor was reportedly arrested in the United States along with some naval officers over bribery charges on Monday, according to the Subic Bay Metropolitan Authority (SBMA) and US newspaper reports.

Glenn Defense Marine Asia figured in a sea-dumping complaint at the SBMA in 2011, which led to a Senate inquiry in February this year.

The company continues to provide cleanup services for US Navy vessels that dock here but it has been prohibited from dumping waste in the sea, said SBMA Chairman Roberto Garcia.

Commander Michael Vannak Khem Misiewicz, a captain-select who commanded the destroyer USS Mustin and who later served as deputy operations officer aboard the USS Blue Ridge for the Yokosuka-based US 7th Fleet, according to a US Attorney’s Office report that was cited by the Stars

Following news of Francis’ arrest, Subic traders are now demanding an investigation into why Glenn Defense Marine has not been sanctioned for the sea pollution complaint.

Francis was reportedly arrested in San Diego, California, along with and Stripes newspaper.

The Stars and Stripes reported that the defense contractor was implicated in an alleged bribery scheme to swap classified ship information for luxury travel and prostitutes.—Robert Gonzaga, Inquirer Central Luzon