The ‘porking’ empire strikes back 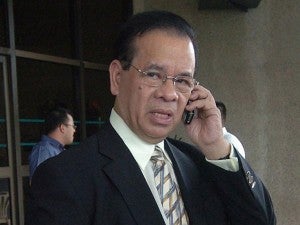 The folks who brought us the hellish nightmare of martial law 41 years ago are back in the news. Actually, they never left. This week, on the 41st anniversary of the declaration of martial law by Dictator Ferdinand Marcos, his former Propaganda Minister (also known as the “Press Secretary”) wrote a spirited defense of the regime’s former Defense Minister by attacking the integrity of the son of the man they arrested on the evening of September 22, 1972, before martial law was declared on September 23, 1972, and then incarcerated in solitary confinement for 8 years.

No, it was not a typo. Martial law was declared on September 23, 1972, not Sept. 21 as many newspapers, columnists and politicians will incorrectly report.

The pretext for the declaration of martial law was the staged ambush of the passenger-less car of Defense Minister Juan Ponce Enrile on the evening of September 22, 1972 (neighborhood witnesses reported seeing men in military uniforms pumping an empty car with bullets). The next day, on Saturday, September 23, Propaganda Minister Francisco “Kits” Tatad went on the air over all the TV stations to read the text of Presidential Decree 1081, officially announcing the declaration of martial law. A few hours later, Marcos himself went on the air to explain his justification for martial law without mentioning that his term as president would end a year later and that he was barred by the Constitution from running for a third term.

In his personal diary entry for September 21, 1972, handwritten on Malacañang stationary, Marcos wrote, “Johnny Ponce Enrile…and Kits Tatad finished all the papers (the proclamation and the orders) at 8 pm.” On the following day, September 22, 1972, he posted at 9:55 PM: “Sec. Juan Ponce Enrile was ambushed near Wack Wack at about 8:00 pm tonight. It was a good thing he was riding in his security car as a protective measure… This makes the martial law proclamation a necessity.” Right. His diary entry for September 25, 1972 describes conditions after two days of martial law, further confirming that martial law was declared on September 23, 1972. 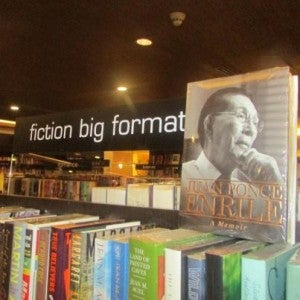 New York Times correspondent Raymond Bonner, in his book Waltzing with the Dictator (1988, Times Books) wrote that Enrile told him in an interview in 1986 that he witnessed President Marcos sign Proclamation No. 1081 on the morning of September 23, 1972.  The New York Times’ article about the declaration of martial law (Mass Arrests and Curfew Announced in Philippines; Mass Arrests Ordered in the Philippines) appeared on September 24, 1972 issue. The Daily Express announced that Marcos the news of the declaration of martial law on the front page of its September 24, 1972 issue.

On the evening of Friday, September 22, 1972, Marcos’ storm troopers engaged in sweeping mass arrests of opposition figures including Senators Benigno S. Aquino Jr., Jose Diokno, Francisco Rodrigo and Rep. Ramon Mitra Jr., and members of the media such as Joaquin Roces, Teodoro Locsin Sr., Maximo Soliven and Amando Doronila and thousands of activists throughout the Philippines. Those who resisted were shot and killed. Congress was shut down and the courts’ powers drastically curtailed. In the course of the next 14 years, thousands of Filipinos from Edgar Jopson to Liliosa Hilao were killed or “salvaged” by the forces of martial law. 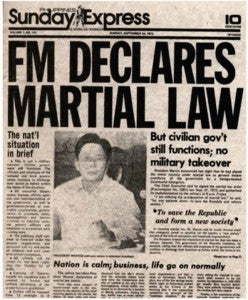 Why was the date of the declaration of martial law changed? Apparently, because of Marcos’ obsession with numerology and with the number 7, he asked Tatad to make sure that Proclamation No. 1081 was officially declared to be signed on a date that was divisible by seven. Tatad dutifully complied with Marcos’ command and September 21, 1972 became the official date that Martial Law was established and the date the Marcos dictatorship began.

Tatad likely read the books by and about Joseph Goebbels, Adolf Hitler’s Minister of Propaganda and National Enlightenment. Goebbels said: “If you tell a lie big enough and keep repeating it, people will eventually come to believe it.” A tribute to Tatad’s incredible propaganda skills is that Filipinos even today still swallow his line that martial law was declared on September 21, 1972, allowing Marcos – from his grave – to control history on his terms.

And now 41 years later, “Kits” Tatad is still at it. When his friend, and martial law cohort Enrile was under attack for allegedly conniving with pork barrel scammer Janet Lim-Napoles to direct hundreds of millions of his pork barrel allocations to her bogus NGOs, with the proceeds split between them, Tatad was prepared to attack Pres. PNoy Aquino.
In his Manila Standard column on September 16, 2013, Tatad disclosed that “highly authoritative sources” told him that “President Benigno S. Aquino III spent several hours in “closed- door conversations” with Janet Lim Napoles, the suspected mastermind in the alleged P10-billion pork barrel scam involving selected opposition lawmakers, before showcasing to the media her formal “surrender” to “the only person she trusted,” on the evening of August 28, 2013.”

This was masterful propaganda. Don’t be on the defensive, go on the offensive. Don’t retreat, attack. Without once mentioning the name of any of his dubious sources, Tatad sought to discredit the damaging revelations made by whistle-blower Benhur Luy about the Pork Barrel money that was funneled by Napoles to Enrile and his senate cohorts, Jinggoy Estrada, Bong Revilla, Gringo Honasan whom Tatad described as “selected opposition lawmakers”. 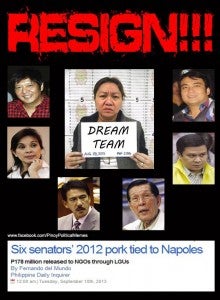 Movie star Sen. Bong Revilla, the son of a movie star politician, had charged that the government’s filing of plunder charges against them is “a case of the administration doing a demolition job on the opposition.” Columnist Conrado de Quiros shot back. “What exactly makes them the opposition? What are they opposed to? The way things look, they’re opposed only to honesty, they’re opposed only to public service. In his particular case, his signature on Napoles’ vouchers is all over the place. No amount of shouting forgery will change the fact.”

Another movie star son of a movie star politician, Sen. Jinggoy Estrada, told the press that “They are conditioning the mind of the public that we are the worst thieves, and that I cannot accept.” As the Philippine Daily Inquirer noted, “Estrada didn’t deny that he and his co-accused are thieves, only that they are not the worst ones – which may be technically true.”

“Guinness lists Ferdinand Marcos as having made off with the largest loot in the country’s history. Ex-presidents Joseph Estrada and Gloria Macapagal-Arroyo have both been accused of the heinous crime of plunder, with the former convicted of it and the latter’s nine-year stay in Malacañang pockmarked by one corruption scandal after another.”

The Inquirer editorial continued:  “The three senators are at the top of the sordid food chain of government officials and enterprising outside operators like Napoles who, according to the NBI and the Department of Justice, conspired to profit from the misappropriation, conversion, misuse, and malversation of their Priority Development Assistance Fund, or PDAF.”

Because Bong Revilla and Jinggoy Estrada botched their defense (no prepared scripts for them to read kasi), it would be up to veteran propagandist Tatad to show the rank amateurs how it is done. First, make up a straw man story (Napoles had lunch with PNoy), then proceed to knock it down. The grander the charge, the more credible it is.

In a fashion that would make Goebbels proud, Tatad described the shock of his sources -“To them, it affects the whole fabric of morality in government, and ultimately Aquino’s moral fitness to remain in office.”

Of course it doesn’t matter that Aquino did not have lunch with Napoles because, as Presidential spokesman Edwin Lacierda said, “The President was at two high-profile events at 10 a.m. and 1:30 p.m. with hundreds of attendees. At both events the President also delivered speeches, the videos of which are now collectively embedded on the President’s Day page for Aug. 28, 2013.”

Tatad is undeterred by documentary evidence to the contrary. A master propagandist will never let facts get in the way of the story. In his article, Tatad attributed a quote to his unnamed sources about their reaction to Aquino’s alleged lunch meeting with Napoles. “This is worse than Nixon’s Watergate,” they said. “They’ve taken all of us for a ride, with no compunction or remorse. They are all morally bankrupt; they have no respect for the truth.”

Ironically, Tatad’s words are a perfect description of exactly what the Marcoses, with the able assistance of Enrile, Tatad and the “Rolex 12” did before, during, and after martial law was declared on September 23, 1972.

The tragedy is not that the perpetrators of the martial law nightmare are still at it 41 years later but that many of us still swallow their big lies.