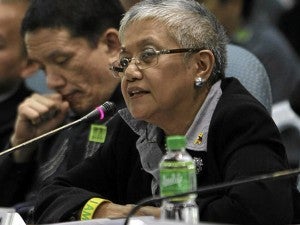 MANILA, Philippines—The government has already sought the aid of Indonesia, which is facilitating the review of the implementation of the 1996 peace agreement with the Moro National Liberation Front, in resolving peacefully the hostilities in Zamboanga City.
Presidential Adviser on the Peace Process Teresita Quintos-Deles said in a statement Tuesday that the Palace pleaded with the Indonesian government as the head of the Organization on Islamic Cooperation (OIC) to mediate the peace negotiation as fighting intensified in Zamboanga City that left 87 dead and 60,000 persons displaced.

Deles said Indonesia responded to the request and gave instructions to the Indonesian embassy to the Philippines.

“Embassy officials explained to us that this meant that their lines would be open to receive and transmit messages from one side to the other that they did not see it to be within their role to proactively make a call to either side,” she said.

The peace process adviser lamented that prior to their approval, the administration sent their appeal to the entire OIC Peace Committee on September 12 but “none of the eight countries offered a proposal.”

The OIC is a group of Muslim countries that played a key role in the 1996 peace agreement that Misuari signed with the Ramos administration.

Deles clarified that the Moro National Liberation Front (MNLF), led by Nur Misuari, has not expressed formally to Indonesia their intention to resolve the ongoing standoff, which now reached its second week.

“We understand from Indonesia that in the several times they received a message from the Misuari group last week, the only topic they raised was regarding travel arrangements to attend the meeting in Yogyakarta, until they asked for postponement of the meeting last Thursday (September 12),” she said in a statement.

On Tuesday, around 150 people taken as hostages by the MNLF were freed.

At noon Tuesday, however, the city police director Senior Superintendent Jose Chiquito Malayo and his two security escorts were held captive by the Misuari-led gunmen tagging them as “prisoners of war.”