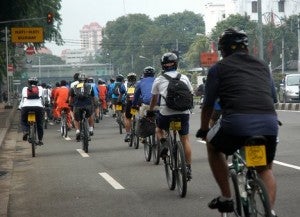 MANILA, Philippines – Filipino eco-warriors will join thousands of people in 75 cities around the world for Sunday’s “Ice Ride,” a global mass bike event to help save the Arctic, Greenpeace said.

Environmentalist bikers will assemble on Emerald Avenue at Ortigas Center in Pasig City and pedal their way to Liwasang Aurora at the Quezon Memorial Circle in Quezon City, organizers said.

The so-called “Arctic Sunday” event will be a whole day of events to promote Arctic protection, the group said in an advisory.

“The Arctic region, known as ‘the world’s air conditioner,’ is now under threat from oil explorations that will further accelerate climate change,” Greenpeace said, adding, “What happens in the Arctic, doesn’t stay in the Arctic.”

“Extreme weather events are already being felt in the Philippines and the rest of Southeast Asia as a result of climate change,” Greenpeace said.

Bikers from Greenpeace and the Firefly Brigade will wear white and pedal some 14 kilometers, from Pasig City to Quezon City, passing by People Power landmarks before arriving at the Quezon Memorial Circle, the group said.

At Quezon Memorial Circle, organizers will hold various public activities starting at 8 a.m. and lasting through 7 p.m., including screenings of environmental documentaries and a sundown concert powered by bike generators, Greenpeace said.