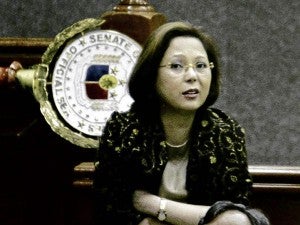 “She left the country last week of August and she hasn’t returned,”. Pedro said.

When asked if there was a hold departure order issued for Reyes, Pedro said there was none.

She also declined to release the travel records of Reyes saying “there is no directive from government for the release of her records.”

Luy is the cousin of Janet Lim-Napoles, alleged mastermind of the scam which siphoned off some P10 billion from the PDAF of several lawmakers through bogus nongovernment organizations.

Senators Enrile, Jose “Jinggoy” Estrada, and Ramon Revilla are among the senators whose PDAF have been linked to the NGO’s of Napoles.

Luy disclosed in a Senate Blue Ribbon Committee hearing on the pork barrel scam Thursday that lawmakers or their chiefs of staff or aides would either fetch their kickbacks from the scam or sometimes accompany when the cash was withdrawn from the bank.

Reyes is among those who would be charged of plunder for the massive pork barrel scam.

Napoles is presently detained in Fort Sto.  Domingo in Sta. Rosa, Laguna. She surrendered to President Benigno Aquino III the day Malacanang offered a bounty for information leading to her arrest.