MANILA, Philippines — Three more governments have advised their citizens against travel to the Zamboanga area amid ongoing clashes between government forces and armed members of the Moro National Liberation Front (MNLF).

The United Kingdom, Australia and Canada reiterated on Tuesday, their standing warnings against travel to Zamboanga City citing the volatile security situation in the area and the continuing closure of the city’s airport. These followed a similar emergency message that United States Embassy in Manila released to its citizens Monday night.

Updating its existing travel warning, the UK Foreign and Commonwealth Office (FCO) informed its citizens of the continuing conflict between government troops and the MNLF, calling the latter insurgents. 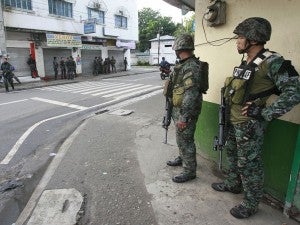 The FCO earlier warned against a “credible and imminent kidnap threat against foreigners” in Zamboanga, where it urged citizens against “all but essential travel.”

“Any British nationals in Zamboanga city should remain indoors and follow the instructions of local authorities,” said the UK foreign office.

Australia also told its citizens to keep out of Zamboanga City and advised those already there to stay away from areas where clashes have been going on.

“Any Australians in Zamboanga City should take shelter in a safe location and follow the instructions of local authorities. The security situation remains highly uncertain. Clashes are continuing,” said Australia’s Department of Foreign Affairs and trade.

Australia also renewed its warning to citizens against travel to most of Mindanao “due to the very high threat of terrorist attack, kidnapping, violent crime and violent clashes between armed groups.”

The Canadian government issued a similar warning, informing its citizens about the latest conflict.

“There is a serious threat of terrorist attacks and kidnappings in this region. Since September 9, 2013, clashes have been occurring in parts of Zamboanga City between Philippine Armed Forces and the Moro National Liberation Front. Civilians have been killed during past clashes,” said the Canadian government on its website.