Fil-Ams urge Aquino to go after US assets of Napoles 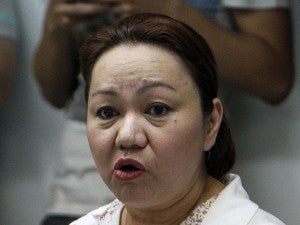 WASHINGTON—Filipino-American community leaders are urging the Philippine government to go after the US assets of alleged pork barrel scam mastermind Janet Napoles and her family as investigations suggest these assets may have been acquired with laundered funds.

Bing Branigin, spokesman of the National Federation of Filipino American Associations (NaFFAA), said the Philippines can ask the help of federal authorities under the reciprocity provisions of their respective AMLA (Anti-Money Laundering Acts) in going after ill-gotten money.

“As close allies for decades, the US and the Philippines have a track record of cooperation in going after crooks and money launderers,” Branigin said in a phone interview. “This has been done before, it can be done again.

Philippine investigators have unearthed several bank accounts said to belong to Napoles and her family as well as real estate properties worth millions of dollars.

Napoles, who is now in government custody, has openly admitted owning a $7-million hotel in California and a $2-million unit at the upscale Ritz Carlton in Los Angeles, California.

Napoles’s high-living daughter, Jeane, 23, is the registered owner of the Ritz Carlton property, according to public records.

Branigin said Manila could even seek the extradition of members of the Napoles family should their complicity in the alleged massive scam involving Priority Assistance Development Fund, the official name of pork barrel allocation from the national budget channeled to senators and congressmen, be established.

Veterans equity advocate Eric Lachica called for the immediate abolition of the pork barrel system because it has become an “instrument for corruption in high places” even as he called for the restitution of the people’s money by going after ill-gotten wealth.

“It’s time Filipinos demonstrated political will at the very top to stop rampant corruption that leads to the dissipation of public funds,” said Lachica, the Washington DC coordinator for the Ninoy Aquino Movement and the Pinoys for Good Governance.

Lachica also urged Fil-Ams to continue exposing corruption in their old country and engaging their American legislators in efforts to pressure their Filipino counterparts to go after graft and corruption.

Lachica surmised that there must be a “paper trail to nail down Napoles and her family” in accumulating the questionable assets and bank accounts.

Napoles’ brother Reynald Lim, who is being hunted by law enforcers after he went into hiding, keeps an account at the Bank of America in San Diego, California, Luy said.

Luy, one of the star witnesses against Napoles now covered by the Justice Department’s witness protection program, also said another Napoles relatrive, Jose Lim, maintains an account at Wells Fargo in Pasadena.

Another account at Wells Fargo in Orange County allegedly belongs to Western Investment Corp., a company said to be owned by the Napoles family.

One of the whistle-blowers has submitted a sworn statement detailing how Napoles allegedly amassed her wealth by funneling the PDAF allocations of some congressmen and senators to bogus non-government organizations.

Investigations suggest that these corrupt legislators get a big chunk of the stolen funds, some of it delivered to them in cash by trusted Napoles employees.

Part of these funds was siphoned off by Napoles and deposited in offshore accounts, the whistlep-blower said.

The witness said the money in those accounts was used by the Napoleses to buy a California hotel worth $7 million and a $2-million unit at the Ritz Carlton in Los Angeles, among other properties.

Napoles acknowledged ownership of some of the properties but insisted they got them using their inherited and hard-earned money.

Last week scores of irate Filipino-Americans picketed in front of the luxurious Ritz Carlton, chanting, “Give the people’s money back!”

Jeane Napoles, the jailed Napoles matriarch’s 23-year-old daughter, lived in one of the more expensive units at Ritz Carlton and gained notoriety after posting her pictures of her expensive collection of shoes, handbags and dresses and cars in her Facebook and Twitter accounts. Those accounts have since been deleted.

Efren Kabigting, a San Jose-based investment advisor, urged the Aquino administration to immediately initiate efforts to have the US accounts of the Napoleses frozen “before it’s too late.”

“I think it has become crystal clear that ill-gotten money has been laundered to buy those properties and to open those alleged accounts,” Kabigting said. “The Aquino administration should ask the help of the US government to get back those assets before it’s too late.”