There was no warning before gunshots, say Taiwan fishers 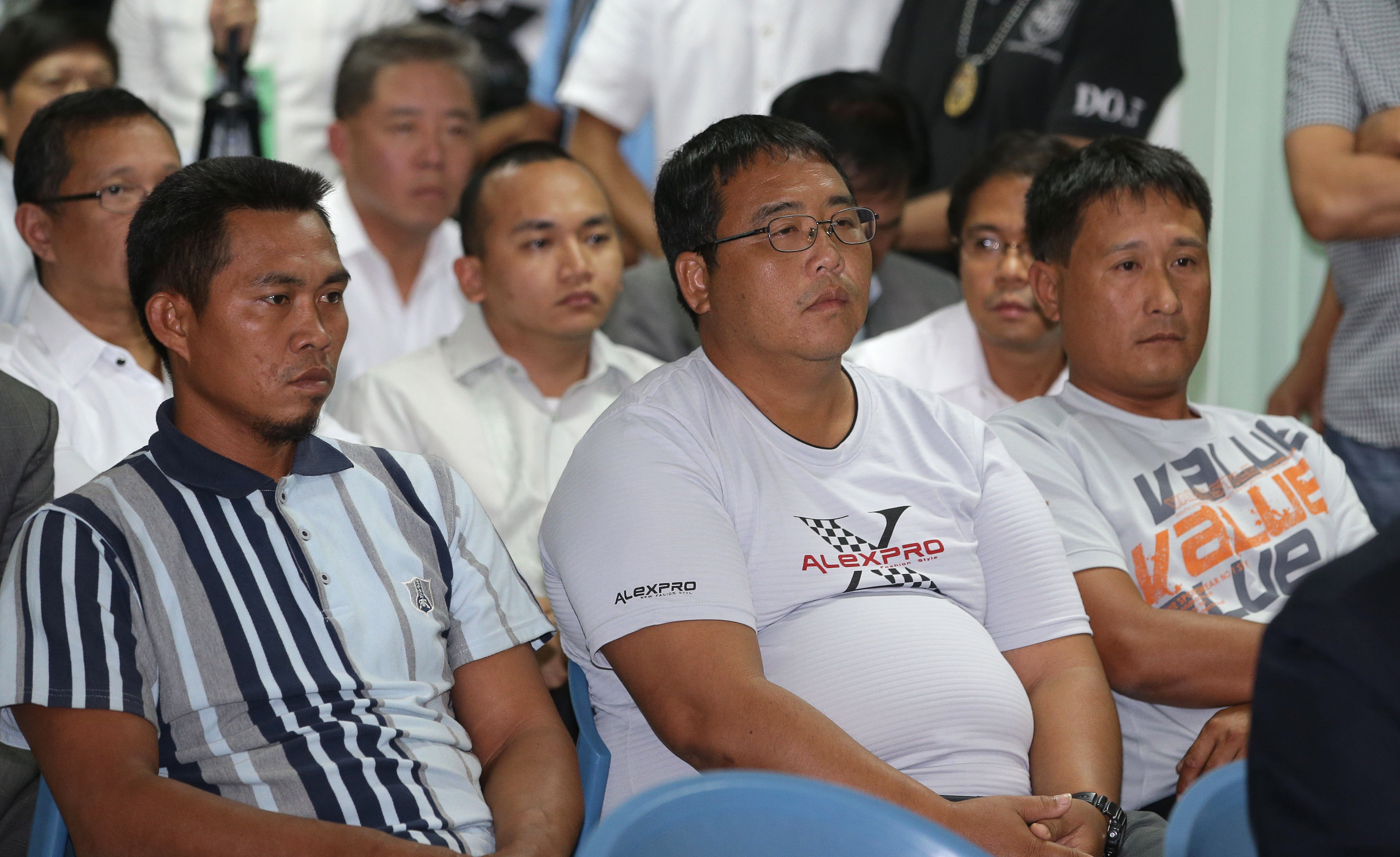 Fishermen Indonesian Imam Buchaeri, left, Taiwanese Hong Jie Shang, center, and Hong Yu Zhi, right, listen during the start of a hearing at the Philippine Department of Justice in Manila on Monday, Sept. 9, 2013. They testified at the hearing against eight members of the Philippine Coast Guard involved in the fatal shooting of a Taiwanese fisherman. AP photo/aaron favila

MANILA, Philippines—The son and son-in-law of the Taiwanese fisherman who was killed when the Philippine Coast Guard (PCG) fired shots at their fishing boat in Balintang Channel on May 9 said they were attacked without warning.

Hong Yu Zhi and Hong Jie Shang, son and son-in-law, respectively, of slain fisherman Hung Shi Cheng, also said they were not fishing when their boat strayed into Philippine waters.

The Taiwanese fishermen made the statements in the affidavits they submitted on Monday to the Department of Justice panel conducting a preliminary investigation of the homicide complaint filed by the National Bureau of Investigation against eight PCG men involved in the fatal shooting.

“There were no whistles or other warning sounds or actions to drive us away. Their vessel approached our vessel at around 40 meters and without any reason fired directly at our vessel,” Hong Jie Shang said.

He said his father-in-law was the only one hit in the group which included himself, his brother-in-law who was captain of the vessel, and Indonesian fisherman Imam Buchaeri.

All three fishermen attended the first hearing of the NBI homicide complaint against the eight PCG men, as well as obstruction of justice charges against two other PCG men, by a DOJ panel led by Assistant State Prosecutor Juan Pedro Navera.

At the start of the hearing, Navera rejected a motion by PCG lawyers asking that the preliminary investigation be conducted by the Office of the Deputy Ombudsman for the Military and Other Law Enforcement Offices because it did not trust the DOJ panel to conduct an “unbiased and impartial” investigation.

PCG lawyer Rodrigo Moreno said the DOJ panel was under the NBI, which conducted the probe into the May 9 shooting, and that it had recommended the homicide and obstruction of justice complaint against the PCG.

Moreno also complained that Justice Secretary Leila de Lima had prejudged the case against the PCG with her statements in the media.

But Navera argued that the NBI had filed more than 100 cases in the DOJ and the DOJ panel was not beholden to the NBI or to De Lima.

He said his panel had jurisdiction over the NBI complaint.

The two Taiwanese and Indonesian fishermen were able to subscribe to their affidavits and were excused by Navera from attending the next hearing on Sept. 15.

Also subscribing to their affidavits were the witnesses of the NBI and the Bureau of Fisheries and Aquatic Resources.

Navera gave the NBI time to fulfill the documentary requirements of its other witnesses and for the referral complaint to be signed by NBI Deputy Director Virgilio Mendez.