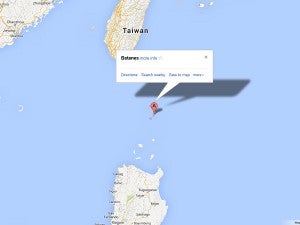 TAIPEI—Taiwan’s Ministry of Foreign Affairs (Mofa) has urged Philippine authorities to explain the arrest and detention of a Taiwanese fisherman on Tuesday even as it demanded that the country ensure that the fisherman is treated humanely.

James Chou, deputy chief of Mofa’s Department of East Asian and Pacific Affairs, told reporters that the lone operator of the raft, Tsai Po, was arrested by Philippine authorities at 3 p.m. on Tuesday at a small islet named Ditarem near Batanes.

Mofa has established contact with Tsai and learned that he is safe and unharmed despite being confined under guard at the Basco Sea Port, Chou said.

According to Chou, Tsai told Taiwanese officials in the Philippines that he was approached and arrested by several armed nonuniformed men while he was “taking a nap” on the islet after completing his operations in nearby waters.

Tsai is currently detained at a detention center in Basco, he added.

Tsai told Mofa officials that he was not given food for the first few hours of his detention, Chou said.

Taipei’s office in Manila immediately protested the treatment of Tsai and the fisherman was subsequently given food, Chou said.

Asked to comment on whether Tsai had trespassed into Philippine waters to fish, Chou said Tsai’s raft was found operating south of the unofficial law enforcement boundary between Taiwan and the Philippines in the West Philippine Sea, which China claims as part of the South China Sea.

But Chou said this “doesn’t mean he had entered Philippine waters.”

He called on the Philippine investigators to release a full report on Tsai’s arrest and detention as soon as possible to prove their claims that the fisherman was operating illegally in Philippine territory.

Chou said the incident will not affect the next round of fishery talks between the two countries.

Taipei and Manila held their first fishery meeting on June 14 in Manila. During the meeting, the two sides reached an initial consensus on several issues, including opposition to the use of force when policing fishing grounds and establishing a mechanism to enable each side to notify the other in the event of an incident at sea.

Both sides also agreed to hold the next round of talks as soon as possible. The China Post/ANN