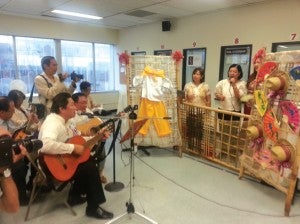 LOS ANGELES – Filipinos across the globe celebrate ‘Buwan ng Wika’ or the National Language Month every August. To commemorate the end of the commemoration, the Philippine Consulate General in Los Angeles hosted a richly cultural closing ceremony on Friday, August 30.

The ceremony, entitled “Isang Gabi ng Harana at Balagtasan,” was held in cooperation with the Philippine Institute of Language, Arts and Culture (PILAC). Harana is an old Filipino music form used in courtship, while balagtasan is a tradition of debating in poetic form.

In keeping with the theme of the celebration, all participants in the program spoke Filipino in the most eloquent way possible.

“In spite of PILAC being a relatively new organization, its members have already demonstrated a fierce determination and sincerity to promulgate the Filipino language and culture,” De La Vega said in Filipino.

De La Vega said that for their efforts, the PILAC’s members should be considered as modern-day Filipino heroes in the name of Filipino arts and culture.

True to form, the highlights of the night were the Harana and Balagtasan segments. Willie Manacsa and Robert Alba performed the opening number, with both singer-guitarists serenadingthe ladies.

For the Balagtasan proper, the Filipino poetic debate on question of whether the Filipino language is enough as a medium of education to achieve national progress.

For the affirmative side were Mylah De Leon of the Asian Journal and Art Garcia, while those for the negative side were Atty. Roman Mosqueda and Bernie Ganon.

Prior to the festivities, Consul General De La Vega announced that the raised at the June 2013 Kalayaan parade and celebration would go to four beneficiaries: Historic Filipinotown Neighborhood Council, Search to Involve Pilipino Americans (SIPA), Filipino American Community of Los Angeles (FACLA), and the victims of typhoon Maring in the Philippines. Each group got a check amounting to $1,803.68.

Cecile Ramos accepted the check on behalf of the Historic Filipino town Neighborhood Council. A SIPA representative was not available to receive their check.

Among them was Jaclyn Yangyuen, a 17-year-old first generation Fil-Am from San Dimas. She said that in spite of being one of the few “kids” at the event, she found it refreshing to be around fellow Filipino-speakers during the Language Month.

Yangyuen said that most of her Filipino schoolmates don’t connect “as well” with the Filipino culture. Yangyuen admitted that even though she couldn’t understand much Filipino, she felt connected to her culture just by listening in and observing the program and conversations going on.

“There’s no language barrier when it comes to emotions.” Yangyuen said. “I can still laugh along with them, and kind of get a feel for what they’re laughing [about],”

Yangyuen said that she would love to encourage her friends to come and join similar events so that they can learn more about being Filipino.

“I think it’s nice to be able to connect to our cultural background and have someone with you who may not be as connected but is trying,” she added.

Event director Bernardo Bernardo, who claimed that he once taught Tagalog at the university level, said that the event would have had a bigger impact if Fil-Am youth had been able to participate in it.

Bernardo said that even if the younger Pinoys couldn’t fully understand the language, it would be great for them to see how the elders portray the culture and how they show Filipino camaraderie in such events.

“We have to be more inclusive,” Bernardo said. “But it’s a gradual process, you can’t expect it to happen overnight.”

PILAC Vice-President Maria Amor said that part of their organization’s thrust is to promote Filipino arts and culture, especially among the youth.

Amor said that because their group was in a rush to prepare for the event itself, they did not have ample time to properly promote Harana at Balagtasan night to the youth.

“However, we will be coming up with promotional materials which we will release to schools to promote PILAC’s Filipino language tutoring services,” Amor said in Filipino.

“We are now in talks with elementary and secondary school officials about our tutorial services,” she said.