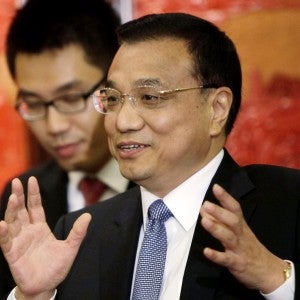 Li called for an upgraded version of the free trade deal between China and the Association of Southeast Asian Nations (Asean) and insisted that “disruptive factors” should not get in the way of regional cooperation, the official Xinhua news agency reported.

Trade has grown sixfold over the past decade to $400 billion in 2012 between China and the 10-member Asean, it said.

But Beijing claims almost all of the South China Sea—believed to sit atop vast deposits of oil and natural gas—even waters close to the coasts of its neighbors, and has been increasingly assertive over the issue in recent years.

Li downplayed the disputes while addressing the 10th China-Asean Expo and business and investment summit in the southern city of Nanning, reiterating Chinese calls for dialogue.

“We have also noticed that there exist some disruptive factors in the region that are against stability and development, but they are not mainstream,” he said, according to a transcript of his speech carried by Xinhua.

“The Chinese side maintains that the South China Sea disputes are not an issue between China and the Asean, and they should not and will not affect the overall China-Asean cooperation.”

Asean members Vietnam, the Philippines, Malaysia and Brunei have often overlapping claims to parts of the South China Sea, and Taiwan also claims it all.

The dispute has rumbled on for decades, but Beijing’s actions to support its claim in recent years have raised concerns with its neighbors, particularly Vietnam and the Philippines.

Vietnamese Prime Minister Nguyen Tan Dung was present at the trade fair, but President Aquino did not attend after Chinese authorities imposed conditions on the trip, the Philippines said, signaling they were related to the territorial row.

Read Next
75 blocks found in shoal
EDITORS' PICK
DOH: Too early to say COVID-19 cases are declining
Duterte praises military but slams police for poor discipline, corruption
Acer starts the year off strong with the Aspire Vero National Geographic Edition
The best of bayside and city living at SMDC’s Sail Residences
COVID-19 cases surging in all regions and provinces, says DOH
Over 3 Million worth of prizes to be won at Smart Padala’s SENDali Manalo Promo!
MOST READ
In Batanes, octogenarian dies of COVID-19
Duterte praises military but slams police for poor discipline, corruption
PBA gets crucial call from GAB for go signal under different setup as reboot of Governors’ Cup could come earlier
Australia suffers deadliest day of pandemic as Omicron drives up hospital cases
Don't miss out on the latest news and information.