Fil-Am kid singer shines at the US Open 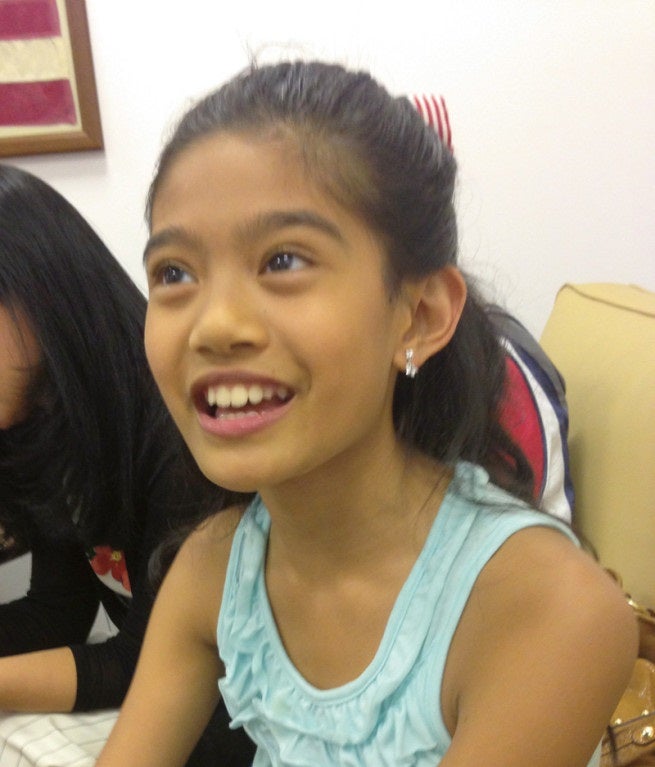 Eleven-year-old Frenie Acoba belted the US national anthem at US Open.

NEW YORK—Frenie Acoba, an 11-year-old Fil-Am, kicked off the U.S. Open, one of the world’s largest sports and entertainment events, by singing the “Star-Spangled Banner” in front of thousands of fans at opening night on Monday, Aug. 26.

“This is my fourth time performing the national anthem here, but my first time to do it on opening night, so I was very nervous,” a visibly excited Acoba told the Asian Journal minutes after her performance at the Arthur Ashe Stadium.

Born and raised in New York to Filipino parents Willy and Nieva, Frenie has been singing for as long as she remembers. None of her parents are musically inclined, but they encouraged her to just sing and pursue her dreams. At the age of eight, Frenie sang at the U.S. Open for the first time. This was in 2010.

“We heard that they were conducting auditions and my mom asked me if I wanted to try it out. I did and I have been doing it every year since then,” Frenie said.

The US Open has a tradition where boys and girls sing the national anthem and other patriotic-themed songs. The talented vocalists ages 12 and under go trough an audition process. This year, among those chosen to perform are youngsters from Arkansas, California and North Carolina.

Frenie also realized one of her dreams – to be a part of a huge Broadway musical. She made her Broadway debut last March as Lavender in the hit musical “Matilda.”

“I’m very happy to be a part of ‘Matilda’s’ cast and I feel blessed to be working with these other kids,” Frenie stated. She is working with 15 other kids in the cast.

Frenie was previously cast in the “South Pacific” national tour and “Damn Yankees” at John Engemann. Whitney Houston, Celine Dion and Aretha Franklin are her musical influences. She has never been to the Philippines, and has been bugging her mom Nieva for a while now.

“I really want to visit my relatives there,” she remarked. The singer has kin in Cebu, where her mother hails and Ilocos Sur, which is where her father is from.

Opening Night New York City Mayor Michael Bloomberg made his 12th consecutive – and final – appearance as Mayor, to welcome the world to New York and the US Open. He joined USTA chairman, CEO and president Dave Haggerty onstage to thank the fans who have continued to support the fortnight sports event.

Four-time Grammy Award winner Lenny Kravitz performed one of his signature hits, “Are You Gonna Go My Way,” which is marking its 20th anniversary. In addition to Kravitz and Acoba, the opening night festivities included a brilliant video and light show that immersed the entire Arthur Ashe stadium.

More than 700,000 fans troop to the USTA Billie Jean King National Tennis Center every year to enjoy 15 days of tennis. According to reports, more than $720 million in economic activity is generated for the city of New York during the tournament.

The year’s festivities actually began last Saturday at the Arthur Ashe Kids’ Day, an annual event that celebrates kids and tennis featuring the USTA’s 10 and Under tennis initiative which lets children learn tennis in a fun and dynamic way.

US Open champions Roger Federer, Rafael Nadal, Novak Djokovic and Serena Williams also joined in the festivities, competing in games and earning money for their chosen charities. This year, security was tighter than usual as First Lady Michelle Obama made an appearance to promote her “Let’s Move” campaign.

In her speech, Obama said she urged her daughters to get active in tennis so they won’t struggle at the game the way she does as an adult. The first lady applauded a USTA initiative to install 5,000 new kid-sized tennis courts across the country and train 15,000 new coaches, trainers and teachers over a three-year period beginning in 2014.

Obama is leading a national campaign to get kids more active and eating healthy meals. She told the fans at Arthur Ashe Stadium that tennis, which has created new kid-friendly courts, rackets and balls to make the game more accessible to young players, is a great way for children to say active. With AP wire reports