Aquino: Media make sense of what’s going on, that it is heading for the truth | Global News
Close
menu
search

Aquino: Media make sense of what’s going on, that it is heading for the truth

MANILA, Philippines—Even as they take their countries’ leaders to task, Asian journalists should also examine their own conduct and motives and learn to become “more responsible,” President Benigno Aquino III said in a speech before a group of coordinating editors of the Asia News Network (ANN), which was holding its first assembly in the Philippines.

Mr. Aquino began by talking about the media frenzy that attended the surrender the night before of Janet Lim-Napoles, the alleged mastermind of the P10-billion pork barrel scam.

In the drama that unfolded on national TV, he said one could see the interplay between the government and the media before the watchful eyes of the people.

He said he hoped the people could see through the complications and noise of that interplay and realize that both key players were trying to arrive at the truth.

“What is taking place is, of course, colored by our own history and culture,” Mr. Aquino said, explaining the frenzied media coverage of Napoles’ movements since her surrender.

Given their experience of oppression and censorship during martial law, the Philippine media were “especially concerned” with checking power and issues of corruption, Mr. Aquino said.

“This is how Janet Lim-Napoles became such a central figure in our recent consciousness. Revelations by whistle-blowers have shown not only the corruption of the past, they also demonstrate the constant need to keep two steps ahead of those constantly plotting how to evade the law,” he said.

“Perhaps, in your own countries, you have also observed the different roles that you play: a watchdog against abuse of power, a partner in strengthening economic and international relations, or a combination of every possible function,” he said. 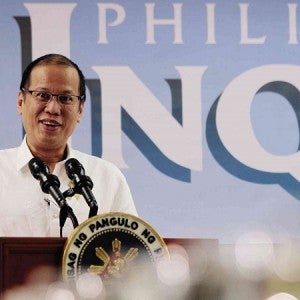 In its blow-by-blow coverage of Napoles’ surrender, one could glean media’s critical role, which is to inform, and this role is constant in every country, the President said.

“No matter what country you are from, in times of calamity or success, it is still the media that, no matter how briefly, brings all sectors together in order to make sense of what is going on and where it is headed,” he said.

“More than anyone else, you know how important it is to uphold integrity and truth in your reports, especially today, with our 24-hour news cycle,” he added.

The President said the media play a very critical role in informing the public, a role that has assumed more immediacy in the age of Twitter and Instagram.

“Given the advent of new media and technology, and with it a greater and more direct engagement with the public, media can now reach anyone anywhere—making your responsibilities even greater,” he said at a dinner hosted by the Inquirer for the ANN editors on Thursday night.

This makes the media an “essential contributor” to national development and a “firm partner” of the people, and why it’s important to “uphold integrity and truth” in reporting, Mr. Aquino said.

“As one of the most influential sectors in your respective countries, I hope that every single day, you ask yourselves: How do I contribute to improving these flawed, human institutions, in order to contribute to the betterment of society?” the President said.

And since the ANN coordinating editors were in Manila to share experiences on ethical boundaries, and fair and honest reporting, the President put a suggestion on the table.

“Your profession’s inherent advocacy for truth and justice can be turned inward and used to examine how media can be more responsible and more efficient. This can only redound to the benefit of your organizations, and to the benefit of the people we serve,” he said.

“I hope you do not mind that I make this request; this is the same thing I tell all my colleagues in government, and others I have the chance to speak with,” he added.

After all, nobody can be complacent “especially when we all desire what is good for our country, the region, and the world,” Mr. Aquino said.

“Being President, I will be the first to admit that this is not easy, but I believe it requires of me the same things your profession requires of you: a true desire to serve, a firm commitment to integrity, and a determination to do the right thing,” he said.

Beyond entertainment and advertising, the “obsession with the truth and the untiring quest for facts” would help everyone “navigate this increasingly complex world and find success—not only for ourselves, but also for the public we serve,” he said.

The ANN is an alliance of 22 newspapers in 19 countries in Asia. It is the world’s largest alliance of leading English-language newspapers in the region. Its mission is to present Asia from the Asian perspective. It is the publisher of AsiaNews, a fortnightly online magazine.

The President said he was very much aware of the pride that media take in “speaking truth to power.”

“As a matter of fact, I begin my day by perusing the broadsheets, both in order to gauge public opinion and to understand and comprehend all sides. No one is perfect, neither myself nor our system of government, and we must always be receptive to criticism delivered out of a desire to help,” he said.

Mr. Aquino said he was aware that the vital role of the media is to provide context and explain what the news means.

At its best, the media highlight trends and occurrences that leaders like himself may not be aware of, “given the matters that occupy our crowded days,” he said.

But then again, the media could also “elevate the level of discourse” amid the cacophony of opinions and viewpoints, he said.

“Suffice it to say: I have always had great faith in the power of a professional, responsible and truthful media,” he said.

According to Mr. Aquino, the Filipino public has set the “burden of proof” for government officials and journalists very high. Research and rigorous fact-checking, the laying out of context, and the virtues of patience and justice are the norm, he said.

“By the very nature of our professions, whether in media or in public service, we are expected to prove our worthiness of public trust on a daily basis,” he said.