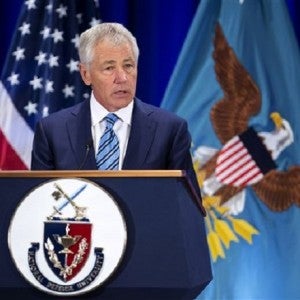 Hagel said he and President Benigno Aquino III discussed expanding the US military’s presence in the Philippines as its Asian ally looks to defend its territorial claims in disputed waters.

But before both countries could sign a deal, Defense Secretary Voltaire Gazmin appeared to throw Philippine doors even wider to American troops and vessels.

Gazmin said American troops and vessels would gain access not only to the former naval base in Subic, Zambales, but also to military facilities across the archipelago.

Hagel, who paid a courtesy call on President Aquino in Malacañang Friday morning, said the framework agreement on the increased rotational presence would boost cooperation between the two militaries.

“The United States does not seek permanent bases in the Philippines. That would represent a return to an outdated Cold War mentality,’’ Hagel told foreign and local journalists in a joint briefing with Gazmin in Malacañang.

What the United States has in mind is a “new model of military to military cooperation,’’ similar to what it has forged with Singapore and Australia, Hagel said.

“Such an arrangement would benefit both our militaries by increasing our ability to train and operate together. Deepening engagement opportunities between our forces will further support President Aquino’s defense modernization agenda,’’ he said.

In response to reporters’ question, Hagel clarified that he was speaking of the “rotational approach.’’

“I think this is one that is in the interest certainly of the United States. The Filipinos will decide whether they believe that’s in their interest or not. We are already working together on ship repair in Subic. So there are already many interests that are there and developing and deepening, but it has to be in the interest of everyone,’’ he said.

It would serve the “interest” of the Philippines, now locked in a dispute with China over a group of islands in the West Philippine Sea, to negotiate the framework agreement, Malacañang had said.

The planned agreement, which dovetailed with the United States’ pivot to the Asia Pacific, would allow US access to existing military facilities in the country.

In the face of Beijing’s growing might, Washington last year saw the necessity to rebalance toward Asia Pacific and deploy 60 percent of the Navy fleet to the region by 2020.

Gazmin, for his part, said areas accessible by the US military would not be limited to the Subic Bay Freeport Zone.

“You talked about the openness to Subic, and Subic Bay is one of the facilities  mentioned as for US forces to access in. As soon as the framework agreement is complete, we will provide the necessary access to all these facilities; and this is not limited only to Subic but to Philippine military facilities, if necessary,’’ he said.

Gazmin added that the enhanced engagement with the United States would translate to “more forces and more engagements.’’

Hagel reiterated the US support for the move of the Association of Southeast Asian Nations to negotiate a code of conduct “to manage’’ disagreements and tensions in the South China Sea.

He said the United States also encouraged nations to resolve disputes through internationally accepted mechanisms and in accordance with international law “without coercion or militarized attempts to alter the status quo.’’

“The United States appreciates the Philippines’ efforts to solve its dispute through peaceful means,’’ he said.

“As the United States rebalance to the Asia Pacific makes clear, this region is very important to America’s economic, strategic and security interests, both now and in the years to come. So I look forward to continuing our engagement in the region. As much as I know, President Obama is looking forward to his coming visit,’’ he said.

He deferred to the White House to give details of Obama’s visit.

In Davao City, Bayan Muna Rep. Carlos Zarate said Hagel’s meeting with the President undermined the efforts of the Senate and Congress to review the constitutionality of the access agreement and the Mutual Defense Treaty.

The Makabayan bloc has called for the scrapping of the 13-year-old Visiting Forces Agreement (VFA) through House Resolution No. 8.

“This meeting sends a signal that the Philippine government is salivating on the proposed closer defense ties with the US government to the extent of letting it off the hook for its crimes against the Filipino people,” Zarate said.

He also raised objections to Foreign Affairs Secretary Albert del Rosario’s statement that US soldiers may use Philippine military bases should a war break out between North And South Korea.

“The Philippine government is freely letting the US government use our country as a staging ground for war against North Korea and China, to the detriment of the Filipino people who are dubious as to the real intention of their overdue stay in the country,” he said.

Zarate said he will take these issues in the congressional deliberations on the budget of the Department of Foreign Affairs as well as in the meeting of the Legislative Oversight Committee on the VFA. With reports from Karlos Manlupig and Allan Nawal, Inquirer Mindanao, and AFP