Hagel: US not seeking bases in PH but more ‘rotational presence’ 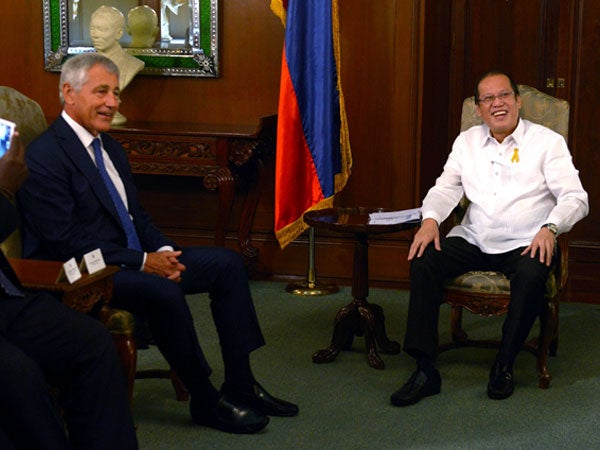 MANILA, Philippines – US Defense Secretary Chuck Hagel announced on Friday that the United States was not seeking to build permanent military bases in the Philippines but an increase in “rotational presence to benefit both our militaries”.

Hagel is on an official visit here, with the Philippines as the last stop on his Southeast Asia itinerary.

“The United States does not seek permanent bases in the Philippines. That would represent a return to an outdated Cold War mentality. Instead, we are using a new model of military cooperation befitting two great allies and friends,” he told reporters in a televised press conference in Malacanang.

The US chief said he was looking to increase rotational presence just like in neighboring countries.

“I’m looking to increase our rotational presence here as we have done recently in Singapore and Australia. Such an arrangement would benefit both our militaries by increasing our ability to train and operate together. Deepening engagement opportunities between our forces would further support President Aquino’s defense modernization agenda.” he said.

The Philippines, an ally of the US, is working on an agreement that would give the US access to military facilities in the country – a move seen to counter China’s expanding military presence in the disputed (West Philippine Sea) South China Sea.

The Philippines and US began their second round of talks in Washington on Thursday to discuss the decision to increase the rotational presence of US forces in the Philippines.

The Philippines and China are locked in a territorial dispute over areas of West Philippine Sea, and the Philippines has sought the United Nations arbitration to solve the disputes.

The US, meanwhile, expressed hope that the dispute be resolved peacefully and at the same time lauded the Philippines’ efforts to solve it through peaceful means.

“The [US] supports ASEAN efforts to negotiate a South China Sea code of conduct which will help peacefully manage disagreements and tensions arising from competing territorial and maritime claims. In the meantime we encourage nations to peacefully resolve their disputes through internationally accepted mechanisms and in accordance with international law, including the law of the sea and without coercion or militarized attempts to alter the status quo,” he said.

“The [US] appreciates the Philippines’ efforts to solve its dispute through peaceful means,” he added.