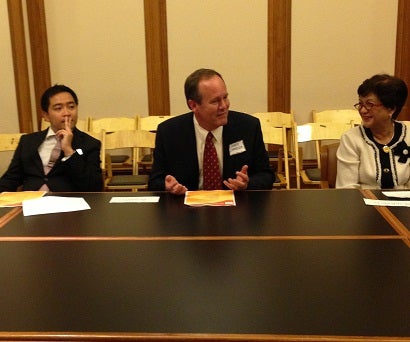 SAN FRANCISCO–Directed by Mayor Ed Lee to bolster economic and trade relations, the San Francisco-Manila Sister City Committee has began setting up a business mission to the Philippines for November 4 to 7 this year, in advance of Lee’s visit in February 2014.

Although the Sister City Committee was founded in 1961, this is the first San Francisco-Manila business mission. It comes after Lee’s multicity business trips to China this year. The plan is to make the mayor’s annual visit to the Philippines official.

At the helm of the committee is businesswoman and the first Fil-Am Commissioner of the Asian Art Museum of San Francisco, Carmen Colet. She was appointed last year by the mayor to make the mission “not just social and fun but to add business.”

Philippine Department of Trade and Industry Commissioner Michael Ignacio hosted the recent briefing for reporters, architects, designers, accountants, insurance agents and other business owners. There was even a Forex service rep offering money transmissions in excess of $10,000.

Mark Chandler, director of the Mayor’s Office, represented Mayor Lee, who was on a weeklong vacation. Chandler, who has visited Manila “three or four times,” said, “If you come from San Francisco and go to the Philippines, they roll out the red carpet and you are treated like a king. Unlike in my house.”

He added that “some call the Philippines the emerging tiger of Asia,” given the confluence of the Philippines’ recent star-rated economy, the emergence of Filipino tech talent and the potentials of a young, mobile English-speaking labor force.

He also suggested that investors tap into the 550-million population market that is the Association of Southeast Asian Nations (ASEAN), “which is as big as the European Union (EU).”

Ignacio said that the Philippines “is the best kept secret in Asia in terms of tourism investment,” with the IT industry contributing $50 billion in Gross Domestic Product (GDP) and the “semi-conductor sector contributing $25 billion, which makes up 40 to 45 per cent of the industry exports.”

One architect complained of the cost of doing business in the Philippines. “There’s great difficulty with the floods, and you’d have to bring your own money to do the job.”

Ascalon said that the Philippines could be a conduit for foreign investors to “the Asian Development Bank, the International Monetary Fund (IMF) and other financial institutions.”

Ignacio added, “The mission will introduce businessmen to decision-makers who will make connections with contractors,”

Ignacio said further that the key to doing business in the Philippines is “to find your niche. We can’t compete with low-cost volume production. Our strength is in quality.” He cited the Philippine furniture industry, which used to be “just rattan but is now high-end.” Vietnam actually recruits Filipino designers. He added

Colet said that to join the Manila business mission, businessmen should buy four-days, three nights packet. It includes the airfare, access to all activities and accommodations “with all the bells and whistles” (Economy Class:  TWN =USD 2,495; SGL=USD 2,895; Business Class:   TWN=USD 3,895.; SGL=USD  4,295.

Itinerary scheduled for Wednesday, November 5, includes a tour of Intramuros and the San Agustin Museum, courtesy call and lunch with Manila Mayor Joseph Estrada, tour of Philippine design, furniture and home exhibit, networking with the Filipino Chinese Chamber of Commerce, one-on-one business matchings between San Francisco and Manila companies, capped by cocktails and dinner hosted by the Filipino Chinese Chamber of Commerce.

Thursday, November 6, starts with a tour of Makati and Fort Bonifacio Global City Central Business District. A full day of official and business talks ends with a cocktail reception hosted by the Philippine Chamber of Commerce.

Visits to Laguna, Subic and other economic zones will be on Friday, November 7, with a briefing by Philippine Economic Zone (PEZA) Director General Lilia de Lima. Lunch is provided by the Economic Zone, followed by a golf game until departure for Manila at 5:30 PM.

Saturday, November 8, is optional for the business mission visitors. They can opt to fly back to San Francisco, go shopping at Greenhills, or visit Boracay, Cebu or Palawan, courtesy of the Department of Tourism.