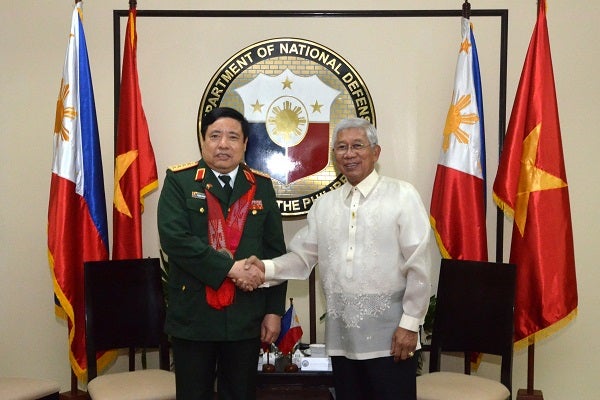 “Both officials assessed joint activities of the two defense and military establishments and explored other cooperative initiatives to include humanitarian assistance and disaster relief cooperation given both countries’ experience on natural disasters,” the Department of National Defense issued in a statement.

They also exchanged views on recent security issues on mutual concern particularly on the situation in the West Philippine Sea/South China Sea and the US’ policy of re-balancing in the Asia-Pacific.

Vietnam had been supportive of the Philippines’s arbitral proceedings against China’s territorial claims. Both the Philippines and Vietnam are claiming some parts of the South China Sea, but China virtually claims almost the entire sea.

“Since the signing of the defense cooperation agreement between the Philippines and Vietnam in 2010, defense relations between the two countries have progressed through high-level visits, personnel exchanges and information-sharing. These exchanges fostered government-to-government links as well as people-to-people ties for the mutual benefit of the two countries,” the DND also said.

In 2010, both countries signed a memorandum agreement aimed to enhance their defense cooperation and give a boost to their bilateral military ties.

Read Next
DFA opens shop in Muntinlupa mall
EDITORS' PICK
Complete your early Christmas shopping with vivo V25 Series
The vivo Y16 makes the season of giving more thoughtful for the whole family
What’s in a name? ‘Maharlika’ evokes time of mythmaking
House energy committee chair Arroyo bats for cheap electricity
Easterlies to bring rain in PH on Sunday — Pagasa
China’s Xi unwilling to accept vaccines despite threat from protests — US intel
MOST READ
Maxene Magalona sees separation from Rob Mananquil as ‘blessing in disguise’: ‘There’s no more anger’
What’s in a name? ‘Maharlika’ evokes time of mythmaking
Are we ready for a sovereign wealth fund?
NBA: Warriors use 3-point barrage to ground Rockets
Don't miss out on the latest news and information.