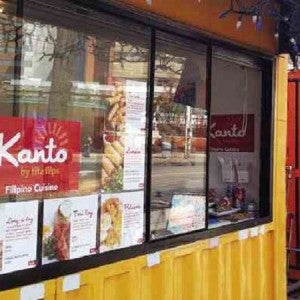 TORONTO, Canada—Twelve years after coming to Canada, Diona Libunao-Joyce finds herself instrumental in placing Filipino cuisine in the culinary landscape of multicultural Toronto.

Two items in her menu that are surprisingly faring well with Canadians are the dinuguan and balut (boiled duck embryo).

Filipino cuisine is not as popular as Thai and Vietnamese cuisine are for Canadians. One food blog post even called Filipino food “Thai food’s ugly sister.” Filipino food has been pegged as too oily and too salty for the heart’s comfort. Joyce is helping turn around this unsavory reputation with fusion dishes that are appealing to Canadians while retaining the authenticity of Filipino cooking.

Joyce, the 36-year-old insurance broker-turned-restauranteur, shared that these are regular offerings at Kanto which raise curiosity from other cultures. 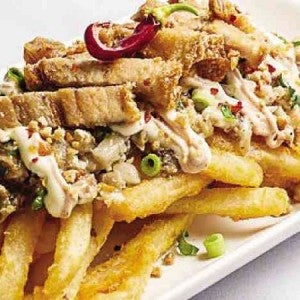 Proof that Kanto and Tita Flips, Joyce’s catering business, are getting attention beyond the Filipino community are the coverage she’s been given by mainstream Toronto media like CBC Radio with food columnist Sarah Elton, the CBC evening news, Toronto Life, BlogTO and Toronto.com.

In April 2012, BlogTO announced that Filipino food was among the top 8 food trends in the city, and credited Kanto and Lamesa, another Filipino restaurant at Queen Street led by Chef Rudy Boquilla, for this.

Another indication that Filipino food is gaining recognition in Canada is McCormick’s recent launching of its Filipino flavor mixes in Toronto and Vancouver. Joyce was tapped by the global firm to be its brand ambassador in Toronto for its flavor mixes. 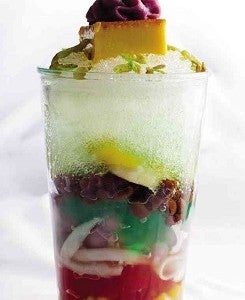 HALO-HALO is making its way around the globe.

Citizenship and Immigration Canada announced earlier in the year that “the Philippines was the largest source country for immigration to Canada in 2012 with 32,704 permanent residents admitted. This represents an increase of 146 percent since 2004.” Additionally, a total of 44,000 visitor visas were issued to Filipinos in the same year which is an increase of 68 percent compared to 2004. There was also a 429-percent increase in the approved study permits compared to 2004. The growing Filipino population in this country can also very well translate to the popularity of Filipino food, or the Filipinos as a viable market.

Kanto specializes in Filipino street food and is one of the 12 vendors that make Market 707, Toronto’s international street food and retail market. Each vendor offers a specialty that ranges from ethical cheeses to Korean and French street foods, to Indian roti, to Gushi (skewer) Japanese street food. The stalls are housed in retrofitted shipping containers. Joyce was in a waiting list with 30 applicants ahead of her when she received an e-mail on December 2011 that her application had been approved. She opened Kanto in the winter of 2012. 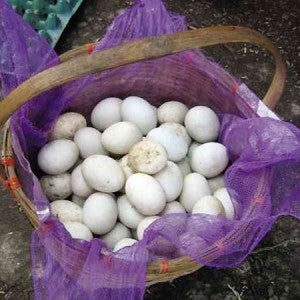 BALUT or boiled duck embryos and dinuguan are items on the menu which are surprisingly faring well, says Diona

So what’s the secret of Kanto? Joyce said she strives to serve fresh foods cooked in front of customers unlike the common turo-turo (cafeteria-style) setup by most Filipino stores where the dishes are in warmers. “As much as possible, I also cook from scratch, like I make my own pork chicharon (pork rinds).” Presentation also creates a good impact, she added.

She also said she tries to balance flavors with her fusion creations to ensure that they are  enticing and exciting for Canadians while retaining Filipino food authenticity.  For instance, sisig-fries is similar to a variety of poutine, a common Canadian dish made with fries, gravy and cheese curds. Another example would be the ukoy (fritter) made from squash and shrimp, which Joyce westernized by blending pumpkin into the recipe.

Aside from being a superb cook, Joyce is also marketing savvy and has used social media channels Facebook and Twitter to reach out and introduce Filipino food to a larger market.  She keeps her Kanto website (www.kanto.ca) interactive with Twitter feeds. Her husband Trevor, who owns a strategic brand management company, helps in product branding and marketing. 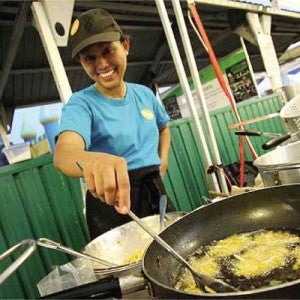 UKOYDiona cooks a batch of this Pinoy favorite.

Asked about how she decided on the name Tita Flips, Joyce said it came from the Filipino term “tita” that refers to an aunt or an older respectable woman, while Flip is North American slang for Filipino. As a brand, Tita Flips embodies an aunt who has a hip and modern personality. Kanto, which translates to “corner,” also means “Kain in T.O. (Eat in Toronto, Ontario).”

She also does not shy away from joining events to showcase Filipino cooking like the recent TNT Night Market which featured the various street foods from different parts of Asia, Friday Night Live at the Royal Ontario Museum, where she was the only participating Filipino chef, and the recently concluded Flavours of the City Express Yourself featuring Market 707 vendors.

On her cooking skills, Joyce revealed that she learned it from her mother, Catalina Libunao of Misamis Occidental, who used to manage a banquet hall. She grew up watching her mother and the kitchen staffs cook for hundreds of guests. “My mom was called the ‘Peanut Lady,’ and I helped her make specialty peanut products when I was a little girl,” said Joyce.

Before coming to Canada, her family had been in the food business for about 30 years. Catalina was known in Oroquieta City for her peanut products like garlic-style adobo peanuts and peanut brittle, a popular peanut candy, sold as Diona’s Peanut Products.

Joyce migrated to Canada in 2001 “by accident.”

She was driving a friend to a travel agency in Roxas Boulevard in Manila to pick up her Canadian visa and was told by an agent there to also apply for a visa. “It was like a challenge for me so I did it, and eight months later my application for landed immigrant was approved.”

She had a good job in a veterinary pharmaceutical company in Manila which gave her second thoughts about leaving for Canada.

Shortly after arriving in Canada, she found out the only person she knew in the country had been diagnosed with cancer. “She was supposed to take me in but because of her illness I ended up taking care of her,” Joyce said. When her friend could no longer pay rent for her basement apartment, they were evicted by the landlord, also a Filipino, she recalled.

She had to work two jobs to sustain themselves and her family in the Philippines. Her first job in Canada was at McDonald’s, where she worked for three months until she got her license to become an insurance broker. She also took on a second job at Country Style, a coffee shop. “It was very tough with two jobs and studying in the evenings, but I got through it. Anyone who undergoes such an experience eventually comes out stronger,” she said.

This same determination prevailed when she opened her catering business in 2008. It started with small party trays which she and her mom would put together whenever there were Filipino gatherings.

Her parents came to Canada in 2007. Knowing that her mother, Catalina, has exceptional cooking skills and a restaurant experience, she set up Tita Flips, which soon became a full-time business for her. It didn’t take a long time for Tita Flips to start serving non-Filipino clientele. Five years after, and with the opening of Kanto last year, Joyce continues to forward Filipino cuisine in the mainstream palate.