UAE officer cleared in US of charges in Filipina maid case 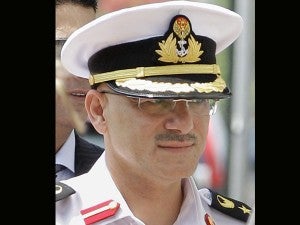 PROVIDENCE, Rhode Island—A United Arab Emirates naval officer was acquitted Friday of keeping an unpaid servant after a judge concluded that the Filipina’s testimony “doesn’t have the ring of truth.”

Colonel Arif Mohamed Saeed Mohamed Al-Ali embraced his defense attorney and wept after Chief Judge Mary M. Lisi found him not guilty in US District Court in Providence of fraud in foreign labor contracting. Earlier this week, Lisi acquitted him of lying to a US Immigration and Customs Enforcement agent.

Elizabeth Cabitla Ballesteros, who is from the Philippines, testified twice at trial. She claimed Al-Ali didn’t pay her for long hours of cleaning, cooking and baby-sitting and forced her to sign a document that acknowledged her pay.

“The complaining witness’s testimony simply doesn’t have the ring of truth,” Lisi said.

Ballesteros, who also filed a civil lawsuit, left the courtroom without commenting. Her civil attorney, Ivy O. Suriyopas, called the verdict a “gross miscarriage of justice.”

Lisi also was presiding over the civil suit, but she recused herself on Friday. The civil case was reassigned to Judge John J. McConnell Jr.

Defense attorney Robert C. Corrente said Ballesteros made up her story in search of a payday.

“This woman is a pathological liar who concocted this story to extort him,” Corrente said. “Her story on its face was ridiculous. I think it’s a disgrace that somebody of his distinction was treated like this.”

Ballesteros accompanied Al-Ali’s family last year to Rhode Island, where he was studying for a year at the US Naval War College in Newport. He has since completed the program, and his wife and five children returned to the UAE in April after Al-Ali said they were shunned as a result of the criminal charges.

Lisi said she had doubts about Ballesteros’s story even before Al-Ali took the stand in his own defense. She questioned why a naval officer with 30 years of service would jeopardize his opportunity to be among a select few to study in the US by scamming a woman who had worked for him for three years and cared for his youngest son since infancy.

She also highlighted the vastly differing accounts of a note Ballesteros said she left before leaving the house on October 7. She testified that the note thanked Al-Ali for bringing her to the US and told the family she loved their children. Al-Ali denied ever receiving such a note.

“If he had done what is alleged in this indictment, why if she left a note, would he call the police and call attention to himself? It doesn’t make sense,” Lisi said.

The trial, which began on July 18, was beset by delays prompted by translation problems and defense allegations that prosecutors had withheld evidence before trial.

Ballesteros’ initial testimony was thrown out after an interpreter retained by prosecutors acknowledged she did not translate verbatim questions posed to the witness and her responses. A new interpreter from California was later retained to help Ballesteros, who speaks a dialect of the Tagalog language.