US, Philippines vow freedom of navigation amid Asia sea rows 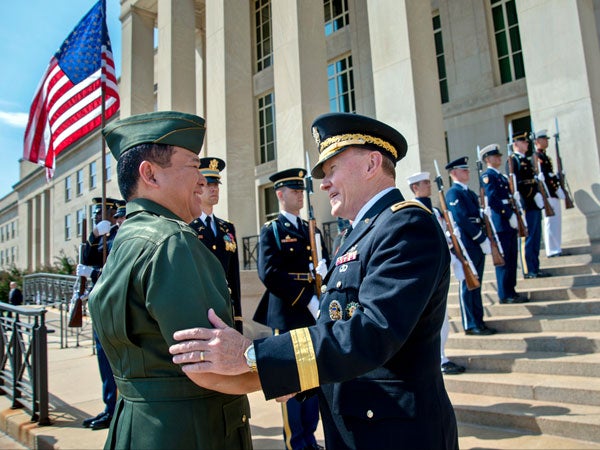 MANILA, Philippines—The United States and the Philippines have vowed to maintain freedom of navigation in a Southeast Asia increasingly beset by maritime territorial rows, the two military allies said.

The military chiefs of the two countries made the pledge in the United States on Thursday as their governments held talks on expanding the American military presence in the Philippines, a joint statement said.

“We share a common interest in maintaining freedom of navigation, unimpeded lawful commerce, and transit of people and goods across the seas,” said Armed Forces of the Philippines chief General Emmanuel Bautista and General Martin Dempsey, chairman of the US Joint Chiefs of Staff.

“We resolve to… strengthen the Southeast Asia security environment in a manner that protects the interests of all who value unimpeded commerce transiting through the maritime domain, while deterring those who would restrict it or act in a manner that might place it at risk.”

The Philippines has been looking to the United States for military and political support as part of efforts to protect its claims to West Philippine Sea (South China Sea) waters from an increasingly assertive China.

Both generals called for a “rules-based approach in resolving competing claims in maritime areas by peaceful means — within the framework of international law”.

Though the statement did not mention China, the Philippines has accused Beijing of endangering Asian peace and maritime commerce through its claims over most of the West Philippine Sea, including areas close to the coast of the Philippines.

While the United States has insisted it does not take sides in the dispute, it has been seeking to rebuild its military footprint in the Philippines, a military ally since 1951, as part of President Barack Obama’s strategic “pivot” to Asia.

“We expect a robust, balanced and responsive security partnership… (through) mutually beneficial bilateral military training, exercises and operations, provided by an increased rotational and temporary presence of US military forces operating from Armed Forces of the Philippines-controlled facilities,” the statement said.

The allies held talks in Manila on August 14 to draw up rules for temporary deployments of more US forces and military assets in the Philippines.

The negotiations are scheduled to resume in Washington before the end of the month.

The Philippines had hosted tens of thousands of US soldiers at two bases near Manila, but they were forced to leave in 1992 after the Philippine Senate voted to end their lease contracts amid strong anti-American sentiment.

A new agreement in 1999 allowed US troops to return to the Philippines for joint military exercises every year.

US special forces have also been rotating through the southern Philippines since 2002 to help local soldiers who are fighting Islamic militants.

Read Next
OFWs in Egypt urged anew to cooperate in ongoing evacuation
EDITORS' PICK
Get 80% OFF Ignite 2020 Cyber Tickets starting 28 September
Despite toll, never too late to fight pandemic—WHO chief
Feud is over: Velasco next Speaker on Oct. 14
Smart poised to turn PH into ‘Smart 5G country’ with nationwide rollout
House to probe Facebook takedown of gov’t accounts
Water remains our saving grace right now
MOST READ
Velasco to take over as Speaker on Oct. 14
2 PDP-Laban allies in House jump over to Lakas-CMD
Gun attack in PMA: Air Force man killed, 2 others wounded
Duterte meets with Cayetano, Velasco amid speakership issue
Don't miss out on the latest news and information.