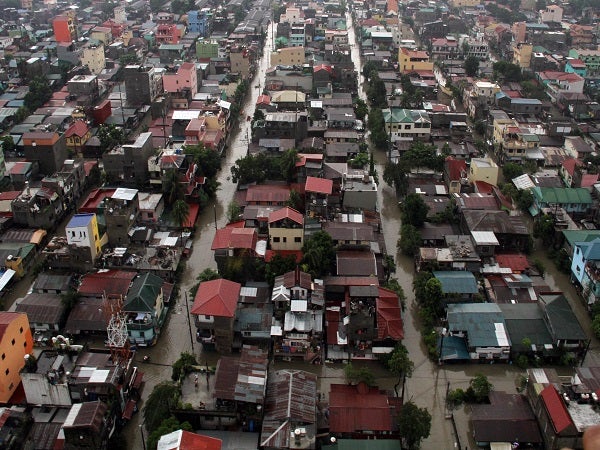 Photo released by the Philippine Air Force shows flooded areas in Paranaque, south of Manila, Philippines on Tuesday Aug. 20, 2013. Some of the Philippines’ heaviest rains on record fell for a second day Tuesday, turning the capital’s roads into rivers and trapping tens of thousands of people in homes and shelters. The government suspended all work except rescues and disaster response. AP/Philippine Air Force

US Deputy Spokesperson Marie Harf, in behalf of the US state government, vowed to provide $800,000 (P35 million) and extended their condolences to the storm-hit families and casualties.

Through the Office of Foreign Disaster Assistance (OFDA) under the United States Agency for International Development (USAID), Harf said in a statement that $300,000 (P13 million) of the aid will be allotted for non-food emergency reliefs.

While $500,000 (P22 million) will be contributed for “warehousing and logistics support to improve local rapid response efforts,” she said.

Harf said the OFDA is working in close coordination with the local governments in “conducting assessments of the affected areas, helping identify and prioritize needs, and coordinating response activities.”

Meanwhile, the US ambassador to the Philippines Harry K. Thomas Jr. lauded the Filipinos for indefatigably “facing adversity with good cheer and help to flood victims.”

Thomas, in his official Twitter account, added that aside from the initial P35 million aid by the US State Department, $250,000 (P11 million) was added to the US’ financial help to those battered by Maring, which left eight people killed and four missing as of Wednesday.