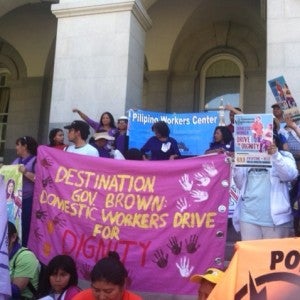 Chanting in different languages, the demonstrators descended onto the State Capitol with a colorful array of banners and giant puppets. A children’s contingent led the march, chanting and asking the governor to give their moms overtime protections.

Several California Senators and Assembly members spoke, echoing the coalition’s demands. Senators Leland Yee, Kevin De Leon, Hannah Beth Jackson, Assembly members Das Williams Roger Dickinson, Richard Bloom, Steve Rudford and a dozen other lawmakers in their own way reiterated that AB 241 is a “common-sense bill” and that the time has come to “protect the dignity of care givers!”

“I am glad to see the workers coming here to Sacramento. Together, we will get this bill, AB 241, passed and signed,” said the bill’s author, Assembly member Tom Ammiano.

The Domestic Workers Bill of Rights is part of a movement to make sure domestic workers get the kind of labor protections they deserve. “The movement is taking place all over the country and won’t be over until domestic workers’ rights are spelled out in every state,” Ammiano added.

Aquilina Soriano-Versoza, the Los Angeles executive director of Pilipino Workers Center told Inquirer.net, “I am glad that you came to witness our grand finale of “Destination, Governor Brown: Domestic Workers Drive for Dignity.”

“Domestic workers have historically been exempted from laws governing the rights afforded to other workers–decent wages, a safe and healthy workplace, workers compensation and other labor protections,” said Versoza.

“They are among the most isolated and vulnerable workforce in the state. A number of them also are Filipino, Hispanic and other immigrants. This is why we should require protections to prevent abuse and mistreatment from occurring behind closed doors, out of the public eye. This bill provides domestic workers with industry- specific protections,” she added. 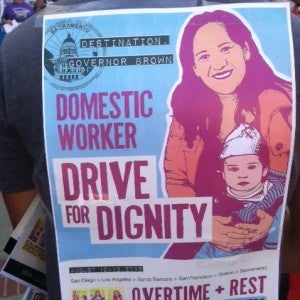 Versoza also led the ralliers and the marchers in a song, “Wake Up, Rise Up, Maria, Don’t Be Afraid of Change!” which she rendered both in Tagalog and English.

The crowd’s biggest applause was for a nine-year-old speaker, Paula Escamilla, daughter of a domestic worker, and for Thu Phan, who employs a personal attendant.

“Like Ms. Thu Phan, I was also born with disability. I’m on a motorized wheel chair almost 24 hours a day,” said Nikki Brown-Booker, whose parents are both Visayans, from the Philippines.

“My personal attendant cares for me in my own home. Without her, I will be in a nursing home. We make sure that her schedule allows for both my care and her ability to attend school,” Brown-Booker added.

“Caregivers are performing a very important role to uplift the quality of life for seniors and we do it with love, care and understanding,” said Lourdes Pablo, a domestic worker who joined the caravan from Los Angeles.

Pablo was an assistant professor at the Nueva Viscaya State University, “but it became a challenge” for her to find a teaching job here. “I see care giving as an equally dignified job, and I surely want my rights to be protected too,” she said.

The State Senate returned from recess last Monday and will be considering AB 241 in the upcoming weeks. It is scheduled for hearing on Monday, August 19 by the Senate Appropriations Committee.