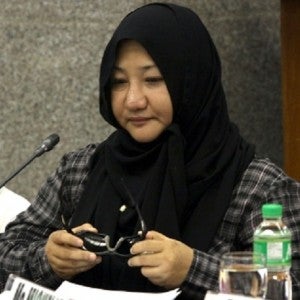 One of the victims identified as “Michelle” (center) testifies that assistant labor attache in Riyadh Antonio Villafuerte attempted to rape and pimp her to an Egyptian national. Michelle even removed her veil to make Villafuerte recognize her during the senate investigation by the Blue Ribbon Committee to probe the alleged “sex-for-flight” scheme of some labor officials in the Middle East.PHOTO BY ALEX NUEVA ESPANA/PRIB

MANILA, Philippines – Senators on Thursday berated a labor official in Saudi Arabia for using obscene words such as “salungso” to refer to bras and ‘salungki” to refer to panties in a text message to a runaway overseas Filipino worker.

Riyadh-based labor attaché  Antonio “Tony” Villafuerte admitted during a joint hearing of the  Senate blue ribbon and labor committees that he indeed used those words when he texted the runaway OFW, who sought refuge at the Philippine Overseas Labor Office (POLO)  in Saudi.

The OFW, a certain “Michelle,” has also accused Villafuerte of allegedly trying to rape her inside the POLO last May 18.

Michelle told the committees that when she sought  refuge  at POLO’s Bahay Kalinga after learning that she would not work as a beautician as stated in her contract, she had not brought anything even her personal  belongings.

So she said she texted Villafuerte, whom she had not met at that time, to buy her underwear.

She even showed  to the committees that  text of the  labor official.

Villafuerte, who was also at the hearing, confirmed sending the text message to Michelle.

“Yes, your honor,” he said, responding to queries of Senator Jose “Jinggoy” Estrada.

(So when I texted  her, I just wanted to find out if she had received the underwear. I did not mean anything there).

(Because  salungso or salungki  is a Tagalog word. I have no other intension.I just translated it to Filipino. That’s what we learned  in our Filipino subject. That’s the context).

But Senator Jose “Jinggoy” Estrada did not buy Villafuerte’s explanation.

(You know, I also  studied  Tagalog. I haven’t encountered  the word salungso or salungki. I haven’t learned those words.  Maybe you only made  up those words).

Villafuerte pointed out that his family came from Guiguinto, Bulacan where he learned to use such words commonly used by    people there.

Enrile reminded Villafuerte that as part of a diplomatic service, the labor official was expected to be very courteous in dealing with people.

(She maybe just a domestic helper but you can already  see that she’s suffering  and you still treat her like that?  You have no intention but that is hurtful? Will you also tell your wife: ‘I also bought you salungki or salungso.’ Will you tell that to your wife?)

Villafuerte said he had used  the terms to his wife.