In the know: PH-US military relations 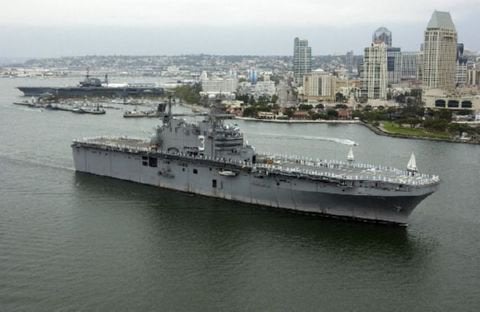 The USS Bealleau Wood: Last US ship out of Subic Bay after rejection by the Philippine Senate of a new bases treaty with the US. PHOTO FROM FACEBOOK.COM

MANILA, Philippines—The basing of foreign military troops in the Philippines is explicitly prohibited in the 1987 Constitution.

“Foreign military bases, troops, or facilities shall not be allowed in the Philippines except under a treaty duly concurred in by the Senate and, when the Congress so requires, ratified by a majority of the votes cast by the people in a national referendum held for that purpose, and recognized as a treaty by the other contracting State,” states Article XVIII, Section 25 of the Constitution.

On Sept. 16, 1991, the Senate voted 12 to 11 to reject a proposed new bases treaty with the United States, citing the pact as “one-sided and unequal.”

The new treaty would have allowed the United States to keep Subic Naval Base for 10 more years in exchange for about $200 million in aid.

One year after the Senate rejection, the USS Bealleau Wood, the last US ship and helicopter carrier in the country, sailed away from Subic Bay.

However, with a 62-year-old Mutual Defense Treaty still in place, the US military continues to be a perennial visitor to the country.

Under the treaty signed on Aug. 30, 1951, the Philippines and the United States agree to come to each other’s defense against an armed attack on the other.

On May 27, 1999, the Senate, voting 18-5 ratified the Visiting Forces Agreement (VFA), paving the way for enhanced defense cooperation and the resumption of bilateral military exercises.

US soldiers arrived for the Balikatan (Shoulder to Shoulder) exercise in February 2000, the first of many.—Inquirer Research