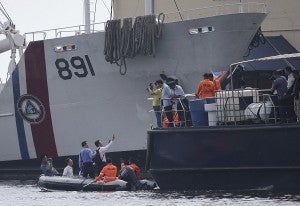 Taiwanese investigators rides a rubber boat as they inspect a ship involved in the alleged shooting of a Taiwanese fisherman while they continue their probe in Manila on Tuesday, May 28, 2013. The daughter of the Taiwanese fisherman allegedly killed by Filipino coast guards filed murder charges during joint proceedings held by Taiwanese and Philippine prosecutors in Pingtung County on Tuesday. AP PHOTO/AARON FAVILA

MANILA, Philippines—Filipino workers are again packing their bags for Taiwan, a sign that relations between Manila and Taipei are returning to normal after a three-month diplomatic row.

Taiwan on Thursday lifted a ban on Filipino workers and other retaliatory sanctions against the Philippines after Manila formally apologized for the fatal shooting on May 9 of a Taiwanese fisherman.

Malacañang also finally released a report of the National Bureau of Investigation that recommended the filing of homicide charges against eight Philippine Coast Guard personnel involved in the shooting.

“The government of the Republic of China (Taiwan’s official title) announces that the sanction against the Philippines is removed immediately after the Filipino side has displayed apology and goodwill in written statements and action,” the foreign ministry said in a statement.

The announcement came after Amadeo R. Perez, chair of the Manila Economic and Cultural Office (Meco) which handles relations in the absence of diplomatic ties, flew to Taiwan and offered an “official apology” on behalf of President Benigno Aquino III.

Tensions had risen sharply after a 65-year-old fisherman was shot dead by Filipino coast guards on May 9 in waters near an island in the Philippines’ extreme north, which Taiwan also claims as part of its economic zone.

Perez then traveled to the small southern port town of Hsiaoliuchiu to meet the family of the dead man, Hung Shih-chen. In televised comments, Perez said he wished to convey “the Philippine people’s deep regret and apology to the family of Mr. Hung Shih-chen over this unfortunate loss of life of their beloved one.”

“May I respectfully present our official letter of apology to the family of Mr. Hung on behalf of our President and our people,” he told Hung’s widow, before giving her the letter and shaking her hands.

Taiwan’s foreign ministry said the Hung family and the Filipino government had reached a settlement on compensation, without specifying its content.

Taiwan said Manila had also agreed to hold further talks on a proposed fisheries agreement as part of their efforts to avoid another such tragedy while handling disputes.

Taiwan had rejected earlier apologies by Manila as inadequate and imposed a series of sanctions, including a ban on hiring new Filipino workers, an advisory urging Taiwanese not to visit the Philippines, and the suspension of trade and academic exchanges.

But diplomatic tensions eased after Philippine authorities said on Wednesday they had recommended homicide charges against eight Filipino coast guards for Hung’s death.

Perez had previously visited Taiwan in May as a “personal representative” of President Aquino, but his apology was rejected by the Taipei government because he had described Hung’s death as “unintended.”

The killing caused outrage and protests in Taiwan, with President Ma Ying-jeou describing it as “cold-blooded murder” as Taipei responded with the sanctions and with navy drills.

After a three-month standoff, Thursday’s announcement on the lifting of the ban on Filipino workers was a clear sign of the normalizing relations between the two countries, said an official of the Meco.

“We have heard that some workers waiting in Manila have been advised to prepare to be deployed (in Taiwan),” Meco resident representative Antonio Basilio said in a text message from Taipei.

Basilio, who was part of the Meco delegation that flew to Taipei to deliver the apology to Hung’s family, said they also received a report that Taiwan’s Council of Labor Affairs has begun processing work permits for Filipinos.

Meco could not say how many Filipino workers were replaced by workers from other countries after the May 15 ban, but estimated that at least 3,000 contracts a month were frozen since then.

Had the crisis lasted longer, Taiwanese employers would have been forced to recruit workers from other countries, Meco officials said.

“They are quite relieved,” Basilio said of the Meco staff. He said Perez has informed President Aquino about the results of their visit in Taipei. With a report from AFP