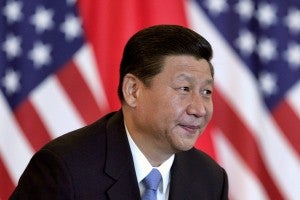 BEIJING—China’s communist rulers are making waves in the Pacific as they extend their naval strength and reach while Japan and the Philippines bolster their own fleets, increasing the risk of a maritime conflict, analysts say.

Five warships completed China’s first circumnavigation of Japan last week in a clear show of force. Other vessels regularly patrol various territories contested by Tokyo and other neighbors—prompting Japan to summon Beijing’s ambassador for a protest on Thursday.

At the same time China’s first aircraft carrier is already in service, and top naval commanders have promised it will have more.

“What we are seeing is that China’s Communist Party leadership is now trying to leverage its new military capabilities to achieve political-strategic goals,” said Rick Fisher, an expert on Asian military affairs with the US-based International Assessment and Strategy Center.

Chinese President Xi Jinping has in recent weeks reaffirmed his country’s aim of establishing itself as a maritime power.

At the same time Washington, which maintains military bases around the region and has strong ties with South Korea, Japan, Taiwan and the Philippines, intends to “pivot” its attention toward Asia.

Beijing insists that it has no interest in “hegemony” and its intentions are peaceful, but analysts say the threat of conflict is rising.

China’s circumnavigation of Japan saw its vessels pass through the Soya Strait between Japan and Russia—on their way to joint exercises in Russia’s Peter the Great Bay—and the Miyako Strait near Okinawa.

On itself the journey is not physically challenging, but in the current context the symbolism was unmistakable.

The state-run China Daily said Beijing’s forces had “fragmented” what it called the “first island chain,” the land masses stretching from the northern tip of Japan to the Philippines that divide the Chinese mainland from the Pacific.

“By sending patrols through these sensitive maritime choke points China shows its neighbors that it will defend its interests beyond the China Seas, that it seeks to build a true ocean-going navy,” said Jonathan Holslag of Brussels Institute of Contemporary China Studies.

Fisher added that for China, “being acknowledged as a ‘superpower’ that can deploy large-scale force to Africa and Latin America would also be a very significant ‘victory.’”

China’s actions and ambitions are prompting its neighbors to take their own defensive measures.

This week Manila took delivery of a Hamilton-class cutter from the United States—days after announcing a purchase from France—while Tokyo unveiled its biggest warship since World War II, a helicopter carrier that could be adapted to carry vertical takeoff jets.

The development raises the prospect of a potential Asian arms race. “To respond to Japan’s light carrier … China can only develop its own real aircraft carriers,” the state-run Global Times said on Wednesday.

Beijing’s first such vessel, the refitted Soviet-era Liaoning, went into service last autumn, and Song Xue, deputy chief of staff of the Navy, said in April that “China will have more than one aircraft carrier.”

Its first domestically built carrier may already be under construction at a shipyard near Shanghai, security consultancy IHS Jane’s reported this week, based on analyses of satellite photos.

The images appear to show a section of the deck that might serve as the track for an aircraft-launching catapult—a feature specialists say would let it carry a wider variety of larger planes.

“We know that China has been working on this, but putting it so fast on a carrier is a major step,”  Holslag said.

Other suggestions are that the images may only be of a practice section intended to help the yard secure a contract to build such a vessel.

Beijing took effective control of the disputed Scarborough Shoal just 200 kilometers from the Philippines last year, humiliating Manila, and keeps up nearly daily pressure in the South China Sea, which it claims almost in its entirety.

Chinese media have released in recent days photos of tourist ships landing on the Xisha Islands, the Chinese name for the Paracels, whose sovereignty is challenged by Vietnam. Taiwan also claims them.

At the same time Beijing’s vessels frequently patrol near the disputed East China Sea islands known as Senkaku in Tokyo, which controls them, and in China as Diaoyu.

“For now the party is content to wage a virtual war of coast guard versus coast guard with Japan,” Fisher said. “We can consider this a ‘shoving match,’ no punches yet. But the contest is real and China will push harder and harder against Japan’s ships.”

Once Beijing has built up its capabilities, he said, “China will be tempted to engineer an ‘incident’ to justify a small war at sea that it thinks it can  ‘win.’

“You can be sure that Xi Jinping understands how a very well timed brief, contained and decisively won war can be very good for China,” he added.