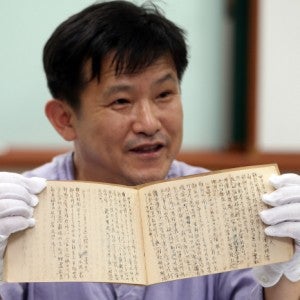 Park Han-yong, a professor at Korea University’s Center for Korean History, shows a diary which a Korean manager of Japanese brothels wrote while staying in Myanmar and Singapore between August 1942 and December 1944 during a press conference Thursday. Yonhap News

Korea University’s Centre for Korean History disclosed a diary that a Korean manager of Japanese brothels wrote while staying in Myanmar and Singapore between August 1942 and December 1944.

The diary shows that the Japanese army received revenue-related reports from military brothels, examined the bodies of sex slaves and regulated the relocations of sexual entertainment facilities.

“The diary shows the case in which the Japanese military with an absolute personnel management authority issued direct orders and took control of issues regarding the comfort women (sex slaves),” Park Han-yong, professor at the university centre, told a press conference.

“This diary is a historical record that shows the Japanese military, the Japanese Government General of Korea and its military command in Korea were involved in the forced mobilization of Korean women for sexual slavery.”

Tokyo argues that there is no clear evidence that sex slaves, euphemistically called “comfort women”, were forcibly mobilized by its military. It stressed civilian entities were to blame for the crime, turning a deaf ear to the victims’ calls for an apology and compensation.

Historians estimate that at least 50,000 women from Asian countries including Korea, China, the Philippines and Indonesia were forcibly made to serve as sex slaves of Japan’s imperialist army.

In the diary, an entry dated July 29, 1943, describes how a woman who left one brothel after getting married was ordered by the military to return.

Another entry, dated March 10, 1943, outlines how some comfort women collectively expressed anger at the order by the army’s 55th division to relocate to a different brothel. Later, they backed down under pressure from the army, the diary said.

The diary also confirmed that the Japanese army recruited Korean women to provide sex to frontline soldiers on at least four occasions. An entry in the diary dated April 6, 1944 touches on the “fourth batch” of comfort women.

Formerly, a US report, written in November 1945, confirmed that 703 comfort women and around 90 people involved in management departed from a Busan port in July 1942.

Oh Chae-hyeon, chief of a local museum, obtained the diary a decade ago at a provincial bookstore during his historical research. After finding it contained much content on comfort women, he decided to offer it to a research centre for in-depth analysis.

According to the Korea University center, the writer of the diary, who previously worked as a scrivener, moved to Southeast Asia in 1942 for business, and stayed in the region between 1942 and 1944.

Japan’s wartime sexual enslavement has been one of the thorniest issues between Seoul and Tokyo as Seoul regards it as a human rights issue while Tokyo refuses to recognize the wartime crime.

In recent years, Seoul has stressed the issue should quickly be resolved as many of the victims, mostly in their late 80s, have died of old age.