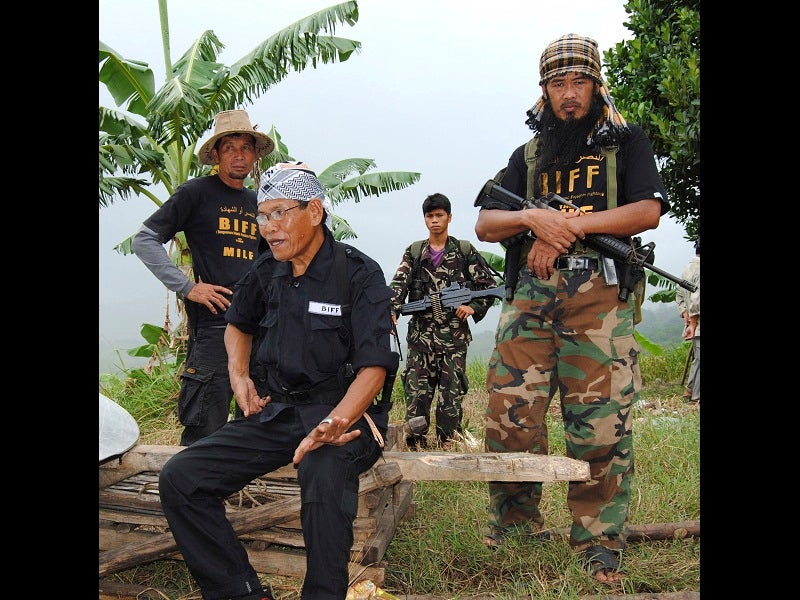 Ameril Umbra Kato, seated, the commander of Bangsamoro Islamic Freedom Fighters, is interviewed by the media inside his rebel stronghold in Maguindanao. The BIFF is said to be harboring Zulkifli bin Hir, a member of the Southeast Asian terror group Jemaah Islamiyah. AP FILE PHOTO

Another source, meanwhile, said a member of the Southeast Asian terror group Jemaah Islamiyah was also hiding in the province.

Kato, formerly with the MILF’s 105th Base Command, bolted the rebel group over serious disagreements with other leaders on the conduct of the peace negotiations with the government.

As for Marwan, Al Haq said he may have played a role in the Aug. 5 bombing in Cotabato City that killed eight people and wounded nearly 30 others.

“That’s what we got on the ground. He’s hiding with BIFF members. We also got feedback from residents near BIFF camps,” he said.

Marwan has been monitored in the country since 2003 and was reported to be hiding among Abu Sayyaf bandits in Sulu.

Marwan has a $5-million bounty on his head, dead or alive, from the US Federal Bureau of Investigation.

Meanwhile, a military source, who refused to be named because he was not authorized to release highly classified information to the media, said an Indonesian national was among those killed in a recent military offensive against the BIFF in Datu Piang.—Jeoffrey Maitem, Inquirer Mindanao