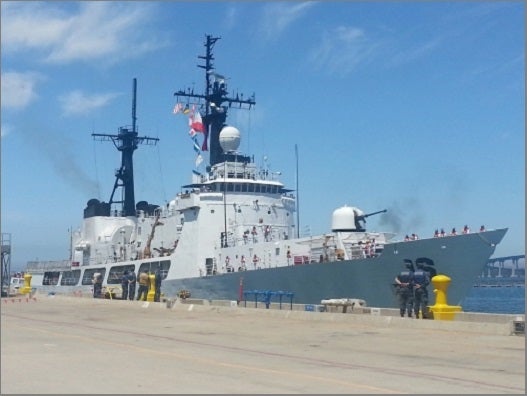 The BRP Ramon Alcaraz is the second Hamilton-class cutter that was acquired by the Philippine Navy under the Foreign Military Sales Program of the United States. US EMBASSY PHOTO RELEASE

SUBIC BAY, Philippines — The Philippines’ two biggest warships expected to boost maritime patrol amid a territorial dispute with China may be four-decade-old Hamilton-class cutters, but defense and military experts believe that acquiring these types of secondhand vessels was still worth it.

“The positive outweighs the negative concerns” in getting Hamilton-class frigates for the Navy fleet, said Max Montero, an Australian-based security consultant and a former naval reservist officer of the Philippine Navy, in his blog post which he updates regularly on defense issues.

In a separate interview with INQUIRER.net, Commander Joe Anthony Orbe, commanding officer of the BRP del Pilar, the country’s first Hamilton-class weather high endurance cutter (WHEC) acquired from the United States, in 2011, said that Hamilton-class cutters were a good choice for used warships.

President Benigno Aquino III will lead aceremony today, Tuesday, here welcoming the arrival of the second Hammer-class cutter acquired by the Philippines — the BRP Ramon Alcaraz (PF-16) — which arrived in the Philippines last Friday after a nearly two-month voyage from the US.

Orbe, said, however that the Navy would still need to acquire other ships that would give complete capability.

“It is a better platform than the ageing naval assets of the PN that negatively affects their capability considering the limitations of their current assets. As an interim platform, the ships will be able to provide the (PN) with capable ships at sea to immediately do its mandate of protecting its interests and territories even with limited capability,” said Montero.

“Anyway it is not expected that a shooting war will happen anytime soon if political arrangements are properly utilized in the absence of armed capability,” he added.

Orbe, who has been the skipper of BRP del Pilar for six months now, cited that one of the advantages of the ship among other Navy assets was its ability to stay at sea for long periods of time, or about 30 days, without going back to port.

The Philippines is locked in a dispute with China over claims on the West Philippine Sea (South China Sea). This prompted the government to take the dispute to the United Nations for abitration.

The BRP Alcaraz will be re-painted gray and will be commissioned to the Navy in October before it will be deployed for patrols.

Both the decommissioned US Coast Guard ships were acquired under the US Excess Defense Article and a military assistance program.

Critics have played down the arrival of BRP Alcaraz, saying that it won’t measure up to China’s military might. One analyst even compared the ship as a “balisong” (fan knife) to China’s “machine gun.”

Before BRP del Pilar and Alcaraz, Montero noted that the Navy’s three largest warships were World War II veterans, the BRP Rajah Humabon (PF-11), the BRP Quezon (PS-70) and BRP Rizal (PS-74), which are even older than the Hamilton-class cutters.

“Due to old age, these ships should have already been withdrawn from service by now. They do not have the weapons and systems currently being used in other navies, limiting the increase of technological skills and knowledge of ship crews and of the PN organization as a whole,” he said.

While BRP del Pilar is old compared to naval assets used by neighboring countries, the analyst noted  that it was 30 years younger than the Navy’s previously largest warships.

“It is also larger and can operate on higher sea states than most if not all PN warships, has one of the best endurance at sea than most comparable frigate and patrol vessels (both new and old), and has superior seakeeping. Despite its age, it also has the capability to accept modern ship systems,” he said.

However, among the disadvantages of getting Hamilton-class cutters that Montero cited were:

* the ships’ old age wherein degradation of hulls and system were expected to happen;

* not having necessary sensors and weapons system a normal frigate has; and

* the vast choices of secondhand frigates in the market.

For a “cash-strapped” Philippine Navy, the Hamilton-class cutters are already a good bargain, he said.

The analyst also said that the Navy would need to acquire “as many large-hull warships it can possibly get with its limited budget,” to show its presence and patrol the vast areas within the exclusive economic zone (EEZ).

“If there are more used warships available in the market and the PN has the budget to purchase more, it must use the chance and do so,” he said.

Montero also mentioned that the cycle from purchase to commissioning Hamilton-class cutters was faster than other frigates.

“Due to the complexity of other used frigates, the PN may not be able to bring these more capable ships to sea immediately as it needs more time to train,” he said.

He also noted that the Hamilton-class ships have the basic modern technology the Philippine Navy needs to train its personnel, and has the size to install current and future weapons and sensors to keep it up-to-date for another decade.

“Despite the removal by the US of its original radar systems, the PF-15 has new navigation and surface search radar and a new C&C/Common Operational Picture system. It also has a helicopter hangar and helideck for shipborne helicopter operations, and provisions for new radar and communications systems if the PN decides to install,” he said, adding that provisions are also available to upgrade and up-arm the Hamilton-class ships.

Reports said that BRP Alcaraz has been fitted with anti-ship harpoon missile, with weapons system “heavier and sophisticated” than those of BRP del Pilar, but defense and military officials have been mum about it due to  national security purposes.

The BRP Alcaraz is equipped with 76-millimeter Oto Melara gun, which is the same as del Pilar’s, and two 25-mm Bushmaster guns and assorted machine guns.

The Hamilton-class frigates are expected to serve the Navy for another decade, but it “must not be complacent and rely too much on these ships,” Montero said, adding that the Navy “must be able to plan its course of actions to move ahead further and not getting stuck with the WHECs.”

“There’s something that we call as “design force mix,” so not all frigates should be of Hamilton-class. But if it’s already planned then it’s okay, but if not, we need to acquire other ships with complete capability such as anti-air, anti-surface and anti-submarine,” said Orbe.

If anything should be improved with the ship, Orbe noted that the sensors and electronic equipment could get some upgrade, “to strengthen the ability to detect what’s within the environment.”

He added that he has so far not encountered glitches with the ship, except for breakdown in machinery which he considered “normal.”

“It’s normal for the machineries to break down but the crew is able to address it. We do a maintenance program regularly whether it has a problem or not,” he said.

He added that he also saw the need to train more people to manage the equipment and machineries.

Although the acquisition of frigates is aimed at achieving “minimum credible deterrence” to be able to patrol territorial seas and EEZ and not directed towards any other country, Orbe believes that the warships could be used for defense together with other assets in the inventory should there be any untoward threat.

Last April, the Department of National Defense said that some of the items in the pipeline that would help the military to achieve a “minimum deterrence capability” include the acquisition of two brand-new frigates under an P18-billion budget.