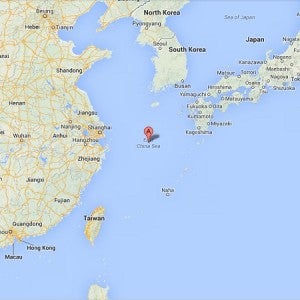 BEIJING—China’s state media on Friday lauded the Chinese Navy for fulfilling its long-held dream of breaking through the “first island chain blockade” and gaining access to the Pacific Ocean through various waterways along the route.

Beijing has been looking to expand its blue-water reach, launching its first aircraft carrier last year, and the circumnavigation of Japan sends a symbolic signal with Beijing and Tokyo at loggerheads over disputed islands in the East China Sea.

Military observers spoke to China Daily on Thursday about the circumnavigation to mark the 86th anniversary of the founding of the People’s Liberation Army (PLA).

“The Chinese Navy has the capability to cut the first island chain into several pieces,” said Du Wenlong, a senior researcher at the PLA’s Academy of Military Science.

“Now the chain is fragmented.”

The “first island chain” refers to the first major archipelagos off the East Asian continental mainland, including the Japanese archipelago, Ryukyu Islands, China’s Taiwan and the northern Philippines.

In the 1950s, Washington came to regard the chain as an important barrier to contain China and other communist countries.

The United States and allied countries installed a strong military presence and advanced weapons at bases along the line.

The PLA’s anniversary came four days after five Chinese warships finished a historic trip, during which the Chinese Navy for the first time entered the Pacific through the Soya Strait, known in Russia as La Perouse Strait, between the Russian island of Sakhalin and the Japanese island of Hokkaido.

The Chinese vessels passed through the strait to train in the West Pacific after a joint naval drill with Russia in the Japanese Sea. It was the first time the Chinese Navy has conducted high-sea training right after a major drill, without rest.

On July 25, the ships crossed the Miyako Strait between Japan’s Miyako and Okinawa islands on their return voyage to Qingdao, headquarters of the North China Sea Fleet.

The ships reached their home port on July 28.

The move marks the first trip by the Chinese Navy circumnavigating the Japanese archipelago.

Japan sent frigates and aircraft to monitor the Chinese fleet at a short distance.

As well as the row with Tokyo, Beijing also claims almost the whole West Philippine Sea (South China Sea), leading to disputes with the Philippines, Vietnam, and other littoral states in the region.

Ministry of National Defense spokesperson Geng Yansheng called for rational views on the training, adding that all countries have the right to navigate these waters and channels in the western Pacific Ocean.

Wu Dahui, a military and international studies expert at Tsinghua University, said the Chinese vessels went through the Soya Strait six hours after 18 warships of the Pacific Fleet sailed there.

Wu viewed it as proof of the growing capability and confidence of the Chinese Navy.

“So far, counting from the south to the north, the Navy has crossed the first island chain through Bashi Channel, Miyako Strait, Osumi Strait, Tsugaru Strait, and now Soya Strait,” Du Wenlong said from the Academy of Military Science.

“It has crossed all the strongest parts on the chain.”

Du said the repeated passages show that the PLA Navy is now capable of sending and supporting its warships to navigate and fight in channels far from the continent.

Li Li, a researcher at the PLA’s National Defense University, said going through the Soya Strait means much more than giving China new access to the Pacific.

“Japan has been highly uneasy about the passage because the PLA Navy usually enters the Pacific through waterways such as the Miyako Strait and the Osumi Strait, which are all in the South,” she said.

Despite the Chinese fleet’s passage through the first island chain, Du Wenlong said the US-Japanese alliance can closely monitor the chain with naval and air forces.

Ou Jianping, a senior expert at the National Defense University, said in an online discussion with military enthusiasts on July 26 that the Chinese Navy must grow into a blue-water navy because almost all of the aggression against China in modern times came from the sea.

China claims a marine territory of more than 3 million square kilometers, and 97 percent of its trade with other countries is transported by sea, Ou said.

“We should view China as a maritime state.”

The Chinese Navy has accumulated experience as a blue-water navy while protecting ships from around the globe in the pirate-plagued waters off Somalia, a task started in 2008 according to a UN resolution.

President Xi Jinping vowed on Wednesday to protect China’s maritime interests and be fully prepared for the complex issues in the region.

He made the pledge while chairing a group study session of the Political Bureau of the Communist Party of China Central Committee to discuss a road map for China to become a maritime power.

“We love peace and will remain on a path of peaceful development, but that doesn’t mean giving up our rights, especially those involving the nation’s core interests,” Xi said.

“China is growing into a global power and should have a Navy that fits its status,” Wu Dahui said from Tsinghua.

“The further our Navy can go, the further we can push out the security threats.”  Reports from AFP and China Daily/Asia News Network