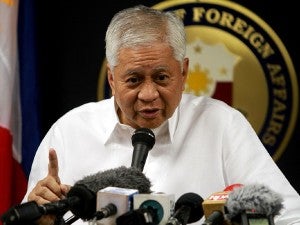 MANILA, Philippines—The Philippines has accepted US President Barack Obama’s nomination of the next ambassador to Manila pending the latter’s confirmation in the US Congress, Foreign Secretary Albert del Rosario said on Thursday.

This developed as the nomination of Assistant Secretary Philip Goldberg, current head of the US Department of State’s Bureau of Intelligence and Research (INR), has raised concerns among militant groups given his expulsion from Bolivia, his last overseas assignment.

“We’ve already issued the agreement and I think he will be going through the US Senate. So we’re hopeful … we think that he will be a very good ambassador,” Del Rosario said, referencing to the document that incoming chiefs of mission present to their host countries as a diplomatic courtesy.

He said he had not met Goldberg, a career diplomat, not even during his stint as Philippine ambassador to the United States.

Asked about concerns about the envoy’s record in Bolivia, Del Rosario replied: “I don’t want to comment on that because I don’t know the circumstances.”

Militant umbrella group Bagong Alyansang Makabayan (Bayan) is wary of Goldberg’s nomination, saying it “may signal intensified US intervention in PH affairs as the US moves more troops and ships toward Asia under its strategic pivot.”

Goldberg was booted out of La Paz in 2008, two years into his term as US ambassador, after Bolivian President Evo Morales, a known ally of staunch US critic Venezuela, accused him of fomenting political unrest and meddling in state affairs. But Washington defended Goldberg and vouched for his professionalism on the job.

“The appointment says a lot about US-PH relations. The Aquino government should be concerned about Goldberg’s past, unless of course Aquino has no problems at all with US intervention,” said Bayan secretary general Renato Reyes Jr. in a statement.