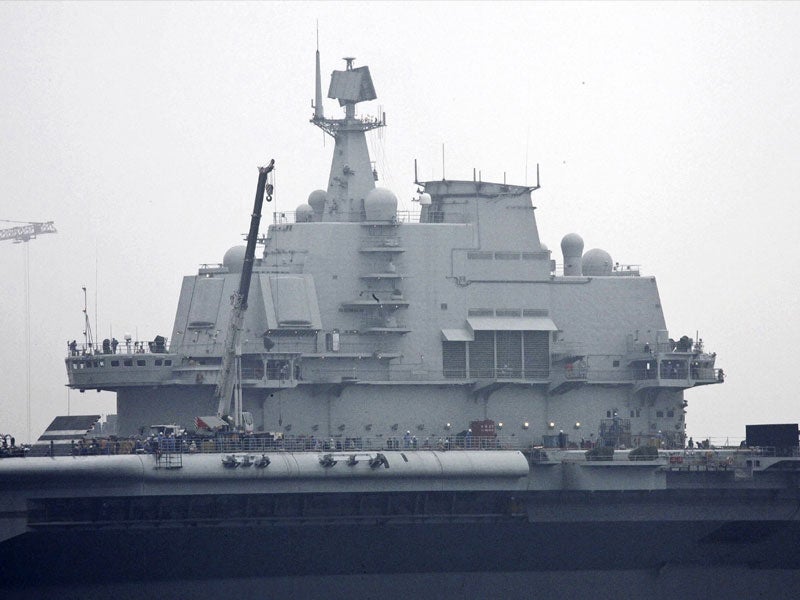 Workers are seen on the flight deck of the China's first aircraft carrier, which is under renovation at a shipyard in Dalian in northeastern China's Liaoning province, Wednesday. AP/Color China Photo

BEIJING—China has expressed its “strong dissatisfaction” at Japan’s comments that it was concerned with Beijing’s increasing naval activity in waters near its shores and was taking measures to bolster its coastal defense.

China’s defense and military modernization drive does not target any other country and is solely for safeguarding its own sovereignty, security and territorial integrity, Foreign Ministry spokesman Ma Zhaoxu said in the statement.

Tokyo’s report released Tuesday said Japan is concerned by Chinese exercises held in the Pacific and in waters surrounding Japan, a worry heightened by what it called China’s long-standing failure to provide information that would reassure the world about its rapid military modernization.

Japan is especially worried by the Chinese navy, which plans to carry out operations and training as a routine practice in waters surrounding Japan, including the East China Sea, the Pacific Ocean and the West Philippine Sea (South China Sea), the report said.

Ties between Japan and China have been strained for years over a contested gas field and disputed islands in the East China Sea.

China also has territorial disputes with the Philippines and Vietnam in the potentially resource-rich South China Sea.

“I hope Japan can learn from the past, seriously reflect on its own defense policy and do more to deepen mutual trust with neighboring countries, maintain regional peace and stability, not the contrary,” Ma said.