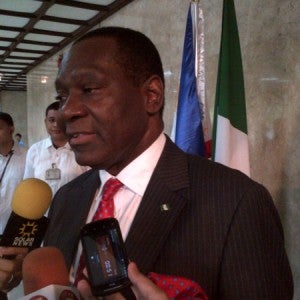 Nigerian Foreign Minister Olugbenga Ayodeji Ashiru visits the country to meet with DFA Secretary Albert del Rosario. He expressed satisfaction with the meeting and hopes that the two countries will be able to improve economic ties.

MANILA, Philippines – The Nigerian Foreign Minister expressed satisfaction with his recent visit to the Philippines to meet with his counterpart in the Department of Foreign Affairs (DFA).

“Very satisfied. We believe this will enable us to develop relations to a much higher level between our two countries,” Nigerian Foreign Minister Olugbenga Ayodeji Ashiru, told reporters in an ambush interview Monday after his meeting with DFA secretary Albert del Rosario.

He said that they discussed improving economic cooperation between the two countries in the sectors of energy, agriculture, and manufacturing in Nigeria.

“We have identified areas where Nigeria and Philippines can best cooperate in this economic level, one of this is power sector. We are already [know of a] Filipino company [that established] a partnership with a Nigerian company [and] won the bid for power generation in the south west [region of Nigeria],” Ashiru said.

“We believe this will also propel the Filipino companies to make inroads into Nigeria. Already there are some of them that have established presence in Nigeria and they are doing very well in the manufacturing sector,” he said.

Del Rosario likewise cited the significant contributions of the 7,200 Filipinos in Nigeria.

“Our nationals are contributing to the development of Nigeria in many areas across several sectors,” he said. “There is so much room for improvement in terms of increasing our trade and investment flows between our two countries.”

The DFA said in a statement that, in 2012, Nigeria is the seventh largest trading partner of the Philippines in the African continent and that “it is a market for machinery, chemicals, transport equipment, manufactured goods, food and live animals.”

“Nigeria is one of the top performing economies in Africa. With a population of 174.5 million, it is the second largest economy in the African continent. Like the Philippines, it has been named by Goldman Sachs’ as one of the Next 11 economies to watch out for,” it said.

Ashiru said that he also raised concerns about Nigerian nationals who are in the country but have yet to be issued with residence permits even though they have studied here or running businesses here or even have already married to Filipinos.

“We raised concerns of Nigerians who are here [but] are unable to be issued with residence permits,” he said.

“I requested [del Rosario] to look into this so that Nigerians who are here legally, who have studied here, who are working here, who are doing businesses here, who are even married to your nationals, to have the opportunity to have a resident visa,” Ashiru added.

The Nigerian community in the Philippines is composed mostly of students and businessmen, while most Filipino nationals in Nigeria are skilled, office, and professional workers, DFA said.

To issue of Filipinos being used as drug mules by Nigerian drug syndicates was also discussed, Ashiru said.

“We have to cooperate to stop the illegal trafficking not just of humans but also in the trafficking of drugs, we need to work together so we can stop these illegal activities,” he said.

“We will continue to discuss this when we have the joint commission session between our two countries,” Ashiru added.