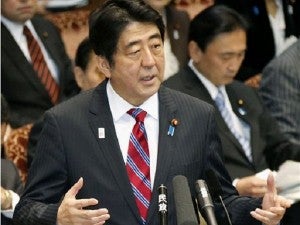 MANILA, Philippines—The Philippines and Japan are set to hold talks on territorial disputes in Asian waters.

Territorial dispute issues on the West Philippine Sea, also known as South China Sea, “will be discussed as part and parcel of the regional security issues,” Hernandez said. “The two sides are expected to tackle maritime security cooperation and safety at sea.”

China has been claiming the entire West Philippine Sea as part of its territory including Bajo de Masinloc (Scarborough Shoal or Panatag Shoal) and the Ayungin Shoal.

Japan is also protesting against what it says were intrusions of Chinese ships into its territorial waters.

Also on the agenda of the meeting between the two are “bilateral matters pertaining to economic cooperation, the Mindanao peace process, and people to people exchanges,” he said.

He will pay tribute to Philippine National Hero Jose Rizal Saturday morning at the Rizal Monument in Luneta Park before the courtesy call to Aquino.