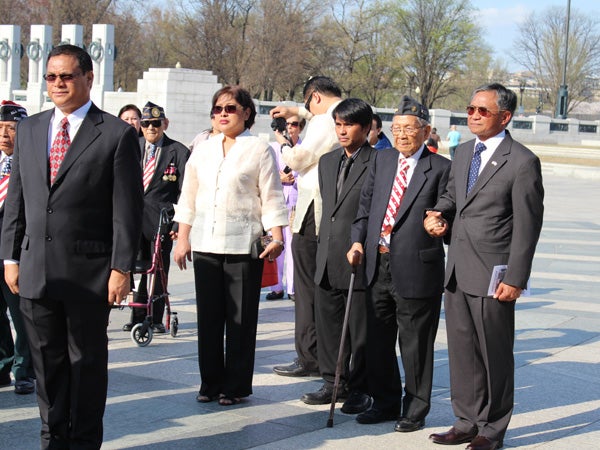 Retired U.S. Army Major General Antonio Taguba (right) holds the hand of Filipino World War II veteran Alberto Bacani, 98, at the Bataan Day commemoration Ceremonies in April at the World War II Memorial in Washington, D.C. Bacani was among the first to receive a check from the Department of Veterans Affairs. JON MELEGRITO

At its mark-up session on July 24, the Senate Veterans Affairs Committee (SVAC) passed several bills, which included a measure calling on the Department of Veterans Affairs (VA) to review its service verification process.

More than 4,000 Filipino veterans have appealed, complaining that the VA has unfairly rejected their claims because they could not meet the standards for documentation of their service as established by the FVEC.

Introduced by Republican Senator Dean Heller of Nevada, the legislation directs the VA, in coordination with the Department of Defense and military historians, “to review the process for determining whether certain individuals have the necessary service requirements for receiving specific Filipino veterans’ benefits.”

Arguing for the bill’s adoption, Heller said, “Filipino veterans who served the United States during World War II deserve to know whether they are eligible for benefits promised to them. No doubt, they are entitled to a fair and complete examination of their records.”

He said further, “I’m thankful to Senator (Bernie) Sanders for being responsive to my concerns and those of Filipino veterans across the country. After working with Senator Sanders to move this legislation forward, we are one step closer towards making sure Filipino veterans are treated with dignity and respect.”

The full senate is expected to vote on this measure after the August recess.

“We are very pleased that Sen. Bernie Sanders [SVAC Chairman] allowed the issue of service verification to be included in the package of bills that was marked up,” said Filipino veteran advocate Ceasar Elpidio, a leader of the Nevada Organization of Filipino American Veterans of America & Families. “We need to keep up the pressure on Congress to ensure that our veterans are properly recognized for their services to this great country.”

Ed Navarra, national chairman of the National Federation of Filipino American Associations (NaFFAA) commended the Senate action as “another positive step, along with other recommended legislation underway, to ensure that eligible Filipino veterans are recognized and compensated as mandated by the FVEC.”

This bill, he said, complements the recent report of the Interagency Working Group, which instituted some changes to expedite the appeals of more than 4,000 Filipino veterans who were disqualified from receiving their rightful benefits.”

So far, 18,698 veterans have each received lump sum payments of $15,000 (for U.S. citizens) or $9,000 (for non U.S. citizens) under the $265-million FVEC Fund. The VA has paid out more than $224 million since the program’s implementation four years ago. President Obama signed The American Recovery and Reinvestment Act of 2009, which included a provision creating the FVEC Fund.

Earlier this month, the White House Interagency Working Group (IWG) issued its report describing changes to the service verification process for Filipino World War II veterans to “increase transparency and accelerate processing of claims.” It acknowledged the complaints and concerns raised by more than 4,000 Filipino Veterans who have filed appeals, maintaining they have a valid basis to protest their disqualification.

Retired Maj. Gen. Delfin Lorenzana, Head of the Office of Veterans Affairs at the Philippine Embassy, has said the disqualification issue stemmed from guidelines requiring each veteran to be certified by the National Personnel Records Center (NPRC) in St. Louis, Missouri.

They could also have been disqualified on technical grounds, like misspelled or transposed names. Veterans have further questioned the methods used by the U.S. Army in 1948 when it finalized official rosters listing every Philippine Army veteran and recognized guerilla.

“The next step now is to pass legislation that would direct the VA to accept certain documents from Filipino veterans as proof of service in determining their eligibility to receive FVEC funds,” says Rozita Lee, a Commissioner on the White House Initiative on Asian American Pacific Islanders (WHIAAPI). “We are grateful to Sen. Heller and others in the committee, notably Sen. Mazie Hirono, who continue to fight for our veterans.”

Retired Major Gen. Antonio Taguba, who served in the U.S. Army for many years and son of a Filipino World War II veteran, sees the SVAC’s action as a crucial step in the Filipino Veterans’ 68-year quest for justice.

“For over six decades, the resilience of the remaining few thousand Filipino WWII veterans who continue to appeal their claims is no less inspirational than their pursuit for recognition of their wartime service,” Taguba said.

“It was with honor when these veterans served the country of their birth, and defended the nation who called them to serve.  They would be honored if this nation would grant them their benefits.”

Among those receiving their checks was 98-year-old Alberto Bacani who mentioned in his remarks that “this has brought about a contagious feeling of happiness and full delight at this time.”