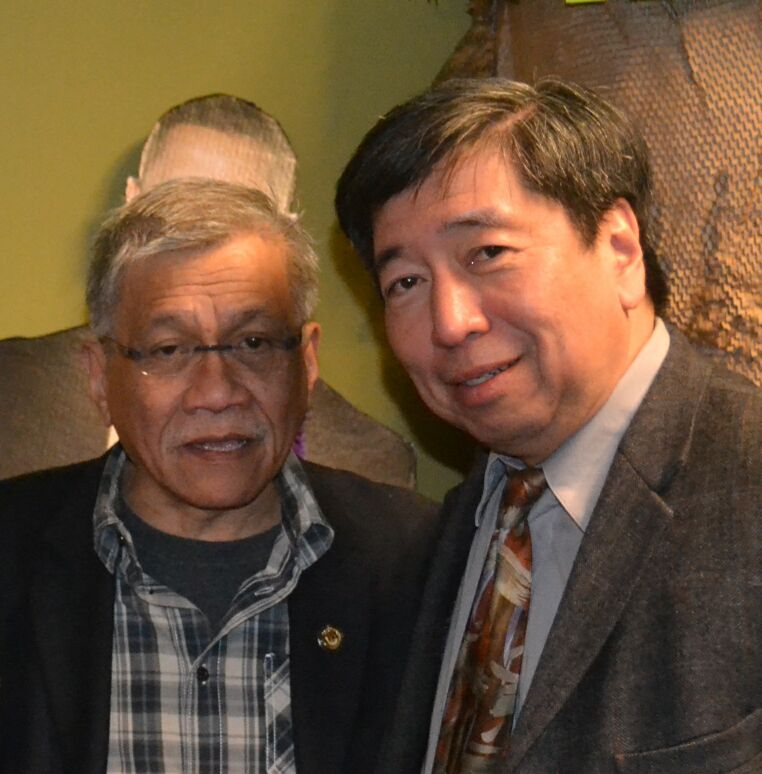 As dark days go, July 24, 2012 is akin historically to what occurred in China on February 18, 1932 when Japan proclaimed the state of Manchukuo as the governing body for the region of Manchuria which it had invaded and detached from China.  The people of China were driven to erase that infamous day from their history just as the Filipino people today are determined to do the same with their own dark day.

This July 24 marks the first anniversary of China’s creation of the “Sansha City” garrison to “oversee and administer” the whole West Philippine Sea and all the islands and terrestrial features within it.  Effective January 1, 2013, Beijing announced last October, its Sansha-based naval fleet would be authorized “to board, seize and expel foreign ships” found within the 3.5 million square kilometers of water that China claims it owns.

Beijing’s creation of Sansha City was preceded by a series of provocative Chinese moves, including the June 2012 occupation of the Bajo de Masinloc (Scarborough Shoal) by up to 90 Chinese ships which barred Filipino fishers from their ancestral fishing grounds, an increased Chinese military presence at Ayungin Reef, and a Chinese general’s boastful exposition of China’s “cabbage strategy.”

The thrust of the cabbage strategy, PLA Major General Zhang Zhaozhong explained, is to surround the Philippine territories with a massive Chinese naval presence to starve Filipino detachments and prevent reinforcements from reaching them. (“Without the supply for one or two weeks, the troopers stationed there will leave the islands on their own. Once they have left, they will never be able to come back.”) 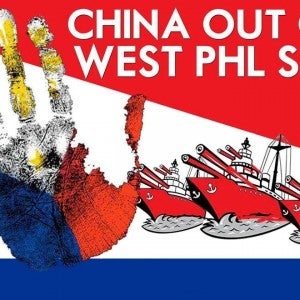 What China adduces as a legal basis for its aggressive moves is a note verbale that Beijing submitted to the United Nations on May 7, 2009 which unilaterally asserted China’s “indisputable sovereignty” over all the islands in the 3.5 million South China Sea and their “adjacent waters/relevant waters.”

Accompanying the note to the UN, without explanation, was the “Nine-Dash-Line” map which includes the Kalayaan Island Group of nine Spratly islands that have long been a part of the southern Philippine province of Palawan which is some 1609 kilometers (1000 miles) from China. Also included is the Bajo de Masinloc which is only 137 kilometers (85 miles) from the northern Philippine province of Zambales, and about 575 miles away from China.

China also insists that the Philippines and the four other South China Sea claimants are not entitled to their 200 nautical mile Exclusive Economic Zone (EEZ) territorial boundaries under the United Nations Convention on the Law of the Sea (Unclos) because the whole area falls under China’s “indisputable sovereignty”. In China’s view, the boundaries of all the other countries extend just 12 nautical miles from their coasts.

If allowed to stand, China’s “Nine-Dash-Line” claim will go down as the most brazen maritime territorial grab in history.

In contrast to China, which is threatening to use force to enforce its claims, the Philippines has actively resorted to peaceful methods to resolve the territorial disagreements.  The Association of Southeast Asian Nations (Asean), to which four of the claimants belong, also favors a peaceful resolution, as shown by the declaration of the recent Asean Foreign Ministers’ Meeting in Brunei, which reaffirmed the  Southeast Asian governments’ “collective commitment under the [2002] Declaration of Conduct [of Parties] to ensuring the 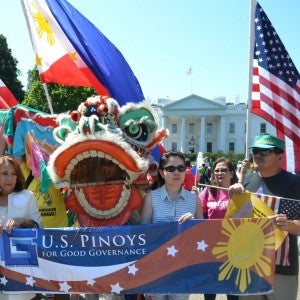 Filipino-Americans hold protest against China in front of White House

resolution of disputes by peaceful means in accordance with universally recognized principles of international law, including the 1982 United Nations Convention on the Law of the Sea (Unclos), without resorting to the threat or use of force, while exercising self-restraint in the conduct of activities.”

Also in contrast to China, which wants only bilateral talks where it can bamboozle its much weaker neighbors, the Philippines has advocated and resorted to multilateral diplomacy to resolve territorial disagreements among rival claimants.  Again, Asean has supported this stance of the Philippine government.

With the exhaustion of all possible bilateral approaches to address the issue and to show its commitment to the use of peaceful methods to resolve its disagreements with China, the Philippines recently brought its case over Bajo de Masinloc to the United Nations for international arbitration.  The process would allow China, the Philippines, and the other claimants to clarify their maritime entitlements under Unclos, paving the way for a truly peaceful and lasting settlement of the West Philippine Sea disputes.

China, however, refuses to participate in the process, a clear indication that it realizes that international law is not on its side.

The Philippines’ and Asean’s moves have placed China on the defensive, making it realize that it is losing the battle for global public opinion by coming across as a regional bully.  Thus, at the Asean Foreign Ministers Meeting in Brunei on June 30, China announced its willingness to participate in talks to come up with a “Code of Conduct” to govern the behavior of the different claimants to the West Philippine Sea.

Although this is a step forward, Filipinos are, like their government, cautious, waiting to see if Beijing is really serious about holding constructive talks or if this is all just a charade for public relations purposes. 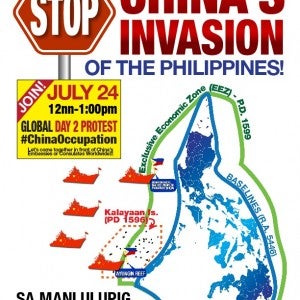 For what China is saying with its “Nine-Dash Line” claim is that a body of water which borders six sovereign states and through which transits one third of the world’s shipping, is merely an inland or domestic waterway like Lake Michigan in the United States.  Such a claim is patently absurd and unacceptable to all countries with a stake in freedom of navigation in the world’s seas and oceans.

China’s behavior in the West Philippine Sea dispute is a far cry from that of a state rectifying borders that were violated by colonial rule, like the People’s Republic of China did in dismantling Manchukuo and reclaiming Manchuria after the Second World War.  It is instead the arrogant behavior of a colonial or imperial state, imitating the expansionist conduct of the western powers and fascist-era Japan that it condemned.

Why is China behaving this way? Where is China coming from? There are two theories.

The first is that it stems from insecurity. China’s increasingly aggressive rhetoric is driven less by expansionist intent than from the insecurities brought about by high-speed growth followed by economic crisis.  Long dependent for its legitimacy on delivering economic growth, domestic troubles related to the global financial crisis have left the Chinese Communist Party leadership groping for a new ideological justification, which it has found in stoking virulent nationalism.

The second theory is that China’s moves reflect the cold calculation of a confidently rising power.  It aims to stake a monopoly over the fishing and energy resources of the West Philippine Sea in its bid to become a regional and later, a global hegemon. 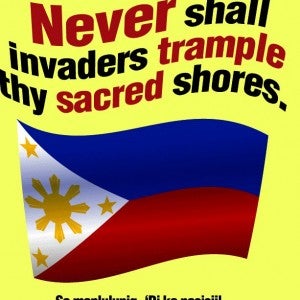 But whatever the source of its behavior, Beijing’s moves have alarmed its neighbors, and may be forcing them into the hands of the United States by allowing the latter to portray itself as a military savior or “balancer.”

If China feels threatened by the closer military relations the US is developing with its neighbors, it has only itself to blame.

While many Filipinos have different opinions on the role of the United States, with some welcoming it as a savior and others seeing it as an opportunist taking advantage of the situation to project its might, most agree that a military confrontation between the two superpowers is not the best way to resolve territorial disputes in the West Philippine Sea.

Filipinos do not begrudge China its effort to provide regional leadership.  Indeed, many see it as a natural course of action for this hugely important country that is slated to soon become the world’s biggest economy.  There is, however, a significant difference between seeking regional leadership and imposing regional hegemony.

The sooner China behaves like a responsible regional leader and not like a power-hungry hegemon, the sooner stability will return to the area, the less opportunistic superpowers will be tempted to take advantage of conflicts among neighbors, the earlier China and its neighbors will finally achieve that mature relationship based on mutual respect for each other’s sovereign rights that was derailed by colonialism and the Cold War.

In the effort of the Philippine government to defend its interests in the  West Philippine Sea, it has had only one reliable source of support:  the Filipino nation.  Standing squarely behind the government are not only the people living in the Philippines but also those in the global diaspora.  From Manila to Riyadh, from Rome to New York, global Filipinos are asserting that the Philippines will not be bullied into submission.

To the government of China, we say, the will of a Filipino people that is united is more powerful than your threats and your armaments.   To the people of China, we declare, we have no quarrel with you but with your government, which has established a Manchukuo-style regime in Sansha City to lord over the West Philippine Sea.  To the people of the world we say, we are confident that you will support our quest to ensure that justice, not brute force, will prevail. Rodel Rodis and Rep.  Walden Bello