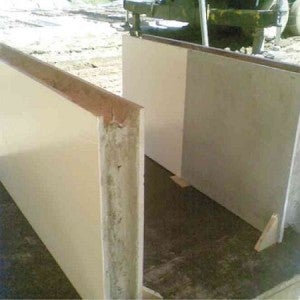 EASY-BLOCKS Brunei-based architect Eddie Urcia’s latest invention is a building block made of cement and toilet paper core rolls. He says they are bigger, sturdier and cheaper than traditional hollow blocks and bricks. Photo from Eddie Urcia

BANDAR SERI BEGAWAN—Over a decade ago, Brunei-based architect Eddie Urcia bagged a Bagong Bayani award for inventing the world’s fastest bicycle with 48-gear combinations. He tried manufacturing his bike but it proved too expensive. Nonetheless, his restless and inventive mind has not stopped working.

The Bicolano-born Urcia more recently unveiled what he believes is one of the cheapest and most ecofriendly building blocks. His “Easy-Block,” as he calls it, is made of cement and toilet paper roll cores and costs 30-50 percent less than traditional hollow blocks or bricks.

“I have invented a cheap and innovative composite block that will revolutionize the construction industry globally,” he declares.

“It is very ecofriendly, simply made of cement and toilet paper roll core. Yes, toilet roll core.  This usually ignored cardboard core has structural properties unimaginable when put together. The usefulness of the block is unlimited and it is an all-weather product, useful in hot or cold countries because of its remarkable insulation,” he pitches.

“My latest invention is intended to compete with bricks and hollow blocks. It is easier to install and manufacture. Also, it is cheaper and better in quality. Easy-Block panels can be used as external walls, interior partitions, flooring, finish ceiling and roofing. The price of one Easy-Block can cover three times the area of one hollow block. It is  cheaper by 50 percent compared to cement or foam board,” he says of his product.

“Laboratory tests prove Easy-Block’s quality and reliability. A typical sandcrete hollow block would have a compression strength of 4,800 psi. Easy-Block has at least 21,660 psi strength. In a test fire,  a .22 caliber bullet chips the surface but does not exit the Easy-Block,” he adds.

Urcia is promoting his blocks for low cost housing projects and is starting to produce his blocks in San Mateo, Rizal and (Guagua and Floridablanca) in Pampanga.

“I came to Brunei in 1981 when I joined Singapore Associate Architects for six years,” he relates. He then moved to the Public Works Department (JKR) of the government of Brunei Darussalam. He is credited with designing Brunei’s National Stadium (30,000-seater multipurpose stadium) which opened in 1984. He was also the resident architect for Brunei’s old airport and has participated in the planning of industrial sites and housing projects, particularly those for persons with disabilities, in the rich Southeast Asian sultanate. 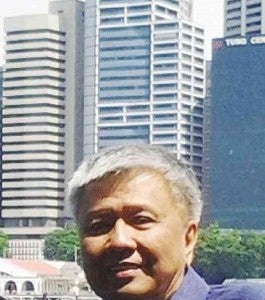 Urcia hails from the Bicol region.

“I was born in the mountains, (during the Japanese war), in Milaor, Camarines Sur (Bicol region). My mother used to teach me how to draw. She held my hand to draw cats and mice when I was 10 years old. I was also fascinated by gears and springs. One time, I experimented with the antique clock of my father (a US-trained educator and one of the founders of what is now Technological Institute of the Philippines). I made time stop… for which I got a spanking,” he recalls with a smile. But his mishaps did not discourage him. When he was 12, he remembers constructing his own toy airplane with sticks and rubber. Not surprisingly, he pursued a career in architecture.

He is currently a senior partner in Urcia and Fang, affiliated with Palafox Associates, a Filipino company.

On his previously noted bicycle invention, he shares: “I had a research and development workshop for innovative bicycles in Brunei. The invention is basically a cycling devise with gears and chain to provide drive revolution to as fast as 2,400 revolutions per minute. I decided to modify my son’s bicycle and install the gear system.

“With my gear system installed, a bicycle has the potential to go faster than any average bike or even race bike. We made a lot of bicycles and sold some, but the price was prohibitive. We had five custom-made in China. It was nice, but again, expensive.”

He has many other inventions to his name. “I obtained a number of patents for my inventions like a prize-winning swim stick to help swimmers and divers. It works like a Pogo bolt stick, telescopic and made of PVC pipe. It lets you swim under water to chase fish. When I was in New York, I experimented with a ‘humane’ mousetrap made of collapsible cardboard, for which the American Inventors Associated had requested to see a prototype. I also invented multiple gears at a single axis, a cable cutter and a fish snapper. Because of this activity, I was awarded the Bagong Bayani (Modern Hero) Award in 2000 in the Philippines.”

In Brunei, Urcia makes a living designing and planning various mixed development projects such as  high-end apartments, commercial hubs and forest road developments, among others. He is also involved with the Islamic University Brunei project together with the Palafox group.

Urcia is proud to say he is now being assisted by his three children who have all followed in his footsteps: “Charisma is with Palafox Associates as associate architect, Francis completed his architecture degree in the United States  and Jasmine is preparing to be a full architect.”

“I am a simple guy interested in arts, architecture and mechanical things. I have a good family to treasure, am very religious and blessed with ideas.  My wife, Conchita, is also working in Brunei,” says Urcia.