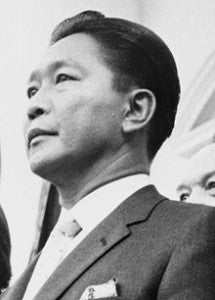 A PDF copy of the 11-page decision rendered by Judge Bonifacio Pascua of Makati RTC Branch 56 was furnished the Inquirer by the staff of Sen. Ferdinand Marcos Jr., who expressed the family’s feeling of vindication on the heels of the June 25 ruling.

“Even if we were to espouse fear or threat as reasons for plaintiffs not to file the same in the Philippines, MDL No. 840 was filed in 1991, or five years after Ferdinand E. Marcos was deposed,” the Makati court said in dismissing the plaintiffs’ petition for enforcing the Hawaii court’s award of billions of dollars in damages.

“Moreover, the case was filed on foreign soil nearly two years after the death of Ferdinand E. Marcos. A thought along the line of fear or threat on the plaintiffs that could have precluded their filing of a case in the Philippines is obviously imaginary,” the Makati court added.

The court said it was unclear how the jurisdictional requirement was overlooked by the US District Court of Hawaii when it rendered the award of damages to the human rights victims in MDL No. 840.

“The failure of the plaintiffs to exhaust the remedies here, where justice and democracy are working, in the mind of this court renders the final judgment in MDL No. 840 null and void for want of jurisdiction,” the Makati court said.

Aside from Mijares, among the petitioners in Class Action No. MDL 840 were Loretta Ann Rosales, now the chair of the Commission on Human Rights, Hilda Narciso Sr., Mariani Dimaranan and film director Joel Lamangan.

The Makati court also questioned how the Hawaii court determined the huge amount in damages awarded to the plaintiffs.

“In the Philippines, there is no known jurisprudential citation or law allowing the use of generalized proof or specifically, statistical sample of class claims, in determining damages in a mass tort action,” the Makati court said.

“To the mind of this court, proving a specific amount of damage could only be determined by requiring the individual presentation of evidence by each party wronged,” it added.

“In a nutshell, the court is of the view that the method used by the District Court in MDL No. 840 in determining compensatory damages violated defendants’ constitutional right to due process,” the Makati court said.

The court also cited the Supreme Court’s opinion on the US decision when it reinstated in 2005 the case for recognition and enforcement of foreign judgment before the Makati RTC. “It bears noting that Section 48, Rule 39, acknowledges that the final judgment is not conclusive yet but presumptive evidence of a right of petitioners against the Marcos estate.”

The case for enforcing the US court ruling was dismissed in 1998 for failure to pay filing fees but the Supreme Court reinstated the case before the Makati RTC in its 2005 decision.

Senator Marcos lauded the decision of the Makati court.

Records showed that on May 21, 1997, the plaintiffs filed a petition for enforcement of the foreign judgment in the Philippines.

The Makati court said the plaintiffs had not presented any new evidence and that they anchored their cause of action in Hawaii upon the Torture of Victims Protection Act (TVPA), which was signed by President George H. W. Bush on March 12, 1992.

The Makati court said that under the TVPA, “a court shall decline to hear a claim… if the claimant has not exhausted adequate and available remedies in the place in which the conduct giving rise to the claim occurred.”

“Instead of presenting rebuttal evidence to counter defendant’s theory of non-exhaustion of remedies, plaintiffs pleaded for a decision. It is very apparent that they are in deep haste to conclude this case, as the records show that their counsels at the onset of this presiding judge’s handling the case, always hammered on their constitutional right to a speedy disposition of their case,” the Makati court said.

The court added that aside from the failure of the plaintiffs to exhaust remedies, the 1995 Final Order in MDL No. 840 displays the glaring absence of the list of plaintiffs under each of the selected class claims, such as torture subclass, summary execution subclass, and disappearance subclass.