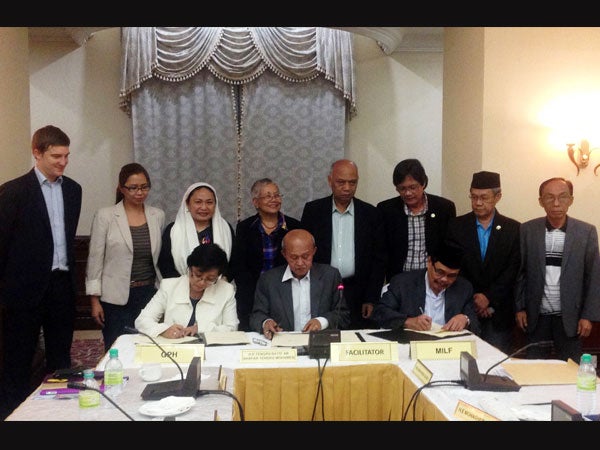 The Office of the Presidential Assistant on the Peace Process said the wealth-sharing deal between the central government and the future Bangsamoro Entity was completed at 10:30 p.m. Saturday.

This happened more than 12 hours after the negotiators convened at  9:40 a.m.

The breakthrough comes after a four-month lull in the peace process, and could move the parties closer to crafting a comprehensive agreement that contains the totality of measures that address the four-decade Moro rebellion in Mindanao.

Wealth-sharing is one of the four annexes to the preliminary Framework Agreement on the Bangsamoro (FAB) that the parties inked in October 2012.

The others are power-sharing, normalization, and transitional modalities. The latter was signed in February.

The parties came to consensus on the wealth-sharing annex around 10:30 p.m. Saturday, according to an advisory of the Office of the Presidential Adviser on the Peace Process (OPAPP).

Several minutes later, Iqbal changed tone and texted that “most likely there would be a breakthrough, insha Allah.”

As of 12 a.m. Sunday (July 14), the peace panel secretariats, joined by some ICG members, were still finalizing the text based on the agreed points.

“Congratulations! Thank you all for not giving up,” said singer Leah Navarro, convenor of the Black and White Movement.

The negotiators convened around 9:40 a.m. Saturday, hoping to firm up the deal before they set out for home where expectations have been high, especially among civil society and community leaders in Mindanao.

The 38th round of talks was originally scheduled for four days, beginning Monday.

Within that time, there were three sessions: two among the technical working groups for normalization and power-sharing, and a panel-level one for wealth-sharing.

On Thursday afternoon, the technical working groups on normalization have inked their joint report, which means the document will be elevated to the consideration of the panels.

Barring a wealth-sharing consensus, government asked for an extension until Friday. And then on Saturday.

She arrived in Kuala Lumpur Thursday afternoon with presidential spokesperson Edwin Lacierda to impress on the panels the strong commitment of President Aquino on the negotiations.

The six-day talks have been the longest exploratory meeting of the parties in the history of the already 16-year negotiations.

The exploratory meeting that produced the 13-page text of the landmark preliminary accord, the Framework Agreement on the Bangsamoro (FAB), took five days to complete.

It also closely resembled the length of the session that led to the firming up of the FAB.

“Meeting just ended, to resume tomorrow. Tired and no sleep; and the other side, fasting, too. If this isn’t commitment, what is?” Iona Jalijali, chief of the government peace panel secretariat, twitted Friday evening.

This is the third Ramadan when the peace panels had to work on the substantive issues of the negotiations.

By Ramadan 2012, the panels were already working on details of wealth-sharing and power-sharing, following through the landmark 10 Decision Points on Principles earlier agreed in April.

“It is now Ramadan 2013: About time indeed we resolve the sticky issues after completing two years of the Hijrah (Islamic) calendar,” government chief negotiator Miriam Coronel-Ferrer said on Monday.

Government is fueled by a self-imposed expectation of making headway in the negotiations in time for President Aquino’s State-of-the-Nation Address on July 22.

In a July 10 piece on The Asia Foundation’s blog, Dr. Steven Rood, a member of the International Contact Group of the peace process, expressed confidence an agreement would be formulated soon, even as he observed that “there has been long, and sometimes slow, negotiation over details.”

“For me, knowing the dedication and sincerity of the people inside the negotiating room, I am confident that a comprehensive agreement will be reached in the near future,” Rood said.

“The seriousness with which both panels and their respective secretariats take this process is heartening to an observer,” he added.

Both parties have acknowledged that the issues facing them now have been there since August last year and have escaped consensus.

But they both acknowledge that the wealth-sharing arrangement is crucial so that the future Bangsamoro government attain real fiscal autonomy.

Earlier, civil society leaders in Mindanao asked them not just to bargain hard but also “be willing to offer and accept a workable and dignified compromise.”

At present, the ARMM has no say over the use of strategic minerals within its territory as this is a power reserved only to the national government.

Its annual budget also has to pass through line-item scrutiny by Congress.

An Inquirer source said that the initialed wealth-sharing deal embodied the 75-25 sharing scheme in favor of the Bangsamoro government.

Government sought it to be refined to only 50-50 for revenues from the exploitation energy sources, the source added.

Oil and gas blocks are found to be abundant in the offshore of Sulu Sea, potentially part of the Bangsamoro territory if the entity is granted internal waters.