‘Little Manila is in the Heart’ 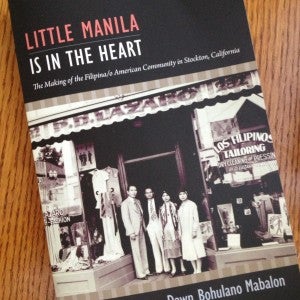 SAN FRANCISCO—Dawn Mabalon was a UCLA college student when she came across Carlos Bulosan’s ‘America is in the Heart.’

By then Bulosan’s memoir was considered a classic and was required reading on many college campuses in California. Bulosan himself was recognized as a major figure in Asian American literature.

The book made such a strong impression on Mabalon that she told her tatay, Ernesto Mabalon, about the famous Filipino American writer.

His response surprised her.

He knew Bulosan, her tatay said, and so did her grandfather who used to even offer the struggling Filipino free meals “because my soft-hearted lolo couldn’t bear to see Filipinos starve.”

Grateful for a kabayan’s kindness, Bulosan gave Dawn’s lolo a signed copy of the first edition of ‘America Is In the Heart.’

In a shocking twist for Dawn, that copy of Bulosan’s most famous book was “cast off by the family as scratch paper,” and later used by a toddler member of the family “as her scribbling pad.”

Skeptical of her tatay’s Bulosan tales, Dawn decided to try to verify them by checking Bulosan’s papers kept at the University of Washington. Sure enough, one of Bulosan’s letters refers to Dawn’s lolo in Stockton.

“Suddenly, my father’s memories became history, corroborated by archival evidence, and framed by my deeper understanding and embrace of my hometown’s Filipino American history,” Dawn writes.

The anecdote sets the stage for Dawn Mabalon’s engaging account of the Filipino American experience in the 20th century.

Her book, ‘Little Manila Is In the Heart,’ recalls the rise of Stockton, California as the one-time capital of Filipino America.

Bulosan, the most famous Filipino figure in American history and literature, is again an important character in this story. But there are other important figures, including members of Dawn’s family.

In fact, this book, in many ways, offers a broader, deeper look of the America Bulosan wrote about.

‘America Is In The Heart’ is a moving account of the struggles of Filipino immigrants, many of whom were radicalized by the racism and the class inequalities of Depression-era America.

But there are so many more stories beyond those told by Bulosan.

In fact, Bulosan was, in some ways, unique. He spoke out and wrote about the injustices and the struggles of that period – and became famous for his outspokenness.

Other Filipinos of that era chose silence.

That was the case for many Stockton Filipinos, who endured racism and abuse, and then the physical destruction of their community.

“When I was growing up, my elders rarely spoke about the Little Manila community that had thrived in downtown Stockton or the demolition that destroyed it in the 1960s and 1970s,” Dawn writes. “Few of them ever talked of the intense racism and discrimination that they had survived in Stockton.”

And despite the fact that many of them knew Bulosan, perhaps the most famous Filipino in American history, few of them spoke of him.

“Those who remembered him regarded the celebrated author as an alcoholic Communist who never worked in the fields, yet wrote as though he did,” Mabalon writes.

It’s an unflattering, even amusing, portrait of Bulosan, who remains one of my favorite writers. The importance of his roles as a writer and an organizer is undeniable, but, clearly, his progressive political views and his activism were not shared by all Filipinos of his time.

That’s what makes Mabalon’s book valuable. It expands and deepens our knowledge of that past beyond Bulosan’s riveting account of the Filipino American experience in the first half of the 20th Century.
Of course, it helps that Dawn Mabalon is retelling the history of her own family and her own community.

But Dawn, who has a PhD in history from Stanford University and is a professor at San Francisco State University, isn’t just interested in retelling that history. She’s actually helped save that history.

In her book, she writes how “the destruction of most Little Manila in the 1960s and the 1990s not only destroyed the physical community but also threatened to obliterate the collective memory of this important place.”

“The loss of Little Manila in the 1960s as a result of urban redevelopment left a traumatic wound for old-timers and second generation Filipinos,” she also says.

And Dawn Mabalon tried to do something about it.

She is also known for her role in helping preserve two remaining blocks of the original Little Manila neighborhood in Stockton.

Ten years ago, through the efforts of community leaders, including Dawn, Little Manila was named one of the nation’s endangered historic places by the National Trust for Historical Preservation.

A book launch celebration for “Little Manila Is In the Heart” will be held on Saturday, July 13, from 2p to 4pm, at Hotel Stockton, 133 E. Weber, Stockton, California.

TAGS: America is in the Heart, Carlos Bulusan, Dawn Mabalon, Immigration, US