Rejected Filipino war vets may yet get US benefits 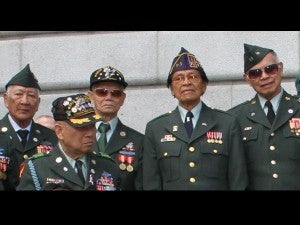 MANILA, Philippines—Thousands of Filipino veterans have been given another crack at receiving benefits for their service to the United States during World War II, after Washington expanded the list of qualifications to include those with documents solely from the Philippine Army.

The Philippine Embassy in the United States said on Thursday some 4,000 Filipino war veterans may yet be eligible for compensation under the Filipino Veterans Equity Compensation (FVEC) Fund, part of the American Recovery and Reinvestment Act (Arra) that provides for benefits to Filipinos who had fought alongside US forces in the war.

Under the 2009 FVEC Fund signed by President Barack Obama, Filipino war veterans living in the Philippines are eligible for a one-time $9,000 lump sum payment, while those residing in the United States get $15,000.

Philippine Ambassador to the US Jose Cuisia Jr. said the White House Interagency Working Group had committed to reconsider the applications for benefits of the Filipino veterans following appeals by the embassy and Filipino-American organizations.

“We appreciate the commitment demonstrated by the Interagency Working Group and the efforts taken by the member agencies to review the certification process of the Filipino veterans and address their concerns,” said Cuisia.

“We are hopeful the procedures introduced would result in more appeals being approved and the processing time reduced,” he added in a statement.

Rosye Cloud, White House Director of Policy for Veterans, Wounded Warriors and Military Families, on Monday released a report titled “Recognizing the Extraordinary Contribution of Filipino Veterans” which “outlines the efforts taken by the United States to increase transparency and accelerate the processing of the claims of Filipino veterans.”

The US’ Interagency Working Group, composed of the Department of Veterans Affairs, Department of Defense and the National Archives and Record Administration, began work on the appeal made by the Philippine Embassy and concerned Fil-Am groups in October 2012, “to address issues surrounding the denial of claims of veterans under the FVEC Fund,” the embassy said.

Under new guidelines set in the report, the US Veterans Administration will now accept Philippine Army documents from the Adjutant General of the Armed Forces of the Philippines in processing claim applications under the FVEC Fund, Cuisia said.

Previously, the US processed only the applications of Filipino veterans who could present certifications from the US National Personnel Records Center asserting that they were both on the Roster of Troops and the Discharge List, documents prepared by the US Army at the end of World War II, said Maj. Gen. Delfin Lorenzana, head of the Philippine Embassy’s Office of Veterans Affairs.

Lorenzana said the claims of many veterans were rejected because their names appeared on only one list.

“What the embassy had been asking the US government to do was to allow Filipino veterans to submit other official documents, and not to decide the fate of our veterans based solely on the two lists,” Lorenzana said.

Cuisia said the embassy would coordinate closely with the Philippine Veterans Affairs Office and the AFP Adjutant General “to ensure that the US Veterans Affairs regional office in Manila will be able to access Philippine Army documents that will aid in their positive evaluation of applications.”

The embassy will also continue to engage the US government in order “to explore all possible avenues” and help other Filipino war veterans qualify for FVEC benefits,” he said.