Captain of wrecked cruise ship on trial in Italy 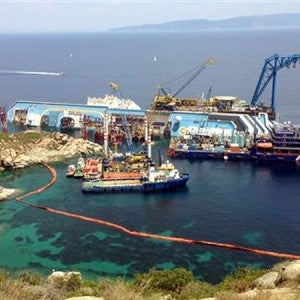 The Costa Concordia cruise ship lies on its side in the waters of the Tuscan island of Giglio, Italy. AP

GROSSETO, Italy—The luxury Costa Concordia cruise liner lies on its side and half-submerged off the tiny Tuscan island of Giglio, blighting the seascape for another summer in an otherwise pristine part of the Mediterranean.

Some 18 months after the hulking ship ran aground, it is a daily reminder of the slow progress Italian authorities have made handling the aftermath. The remains of two of the 32 dead have yet to be found. The timetable to salvage it has stretched on. Only now is anyone facing trial for the catastrophe — and even that process is expected to be immediately delayed.

Though court-appointed experts concluded that the crew and owner Costa Crociere SpA, a unit of Miami-based Carnival Corp., committed blunders and safety breaches that contributed to the disaster off the island’s rocky coast, only the ship’s captain Francesco Schettino has been ordered to stand trial.

The trial was scheduled to begin on Tuesday in Grosseto, in a theater rather than the Tuscan town’s small courthouse to make room for all the survivors, relatives and lawyers. But an eight-day nationwide Italian lawyers’ strike was expected to prompt the judge to immediately postpone the hearing by about a week.

The captain could face up to 20 years in prison if he is convicted of manslaughter, causing a shipwreck and abandoning the Concordia before all of the 4,200 passengers and crew were safely evacuated. Prosecutors contend that on the night of January 13, 2012, Schettino steered the ship too close to the island’s coastline in a publicity stunt for Costa Crociere and accidentally rammed the jagged reef. The cruise company denies that scenario.

Survivors described a chaotic and delayed evacuation, with crew allegedly downplaying the seriousness of the collision, which caused a gash 70 meters (230-feet) long in the Concordia’s side and let seawater rush into the ship.

Schettino has protested his innocence. He insists that his skillful steering of the liner to just outside the port saved thousands of lives. He also contends the ship’s navigational charts didn’t indicate the reef was in its path as it cruised near the island on part of a weeklong Mediterranean tour.

A recording of a phone conversation between Schettino and an exasperated Italian coast guard official who repeatedly ordered the captain in vain to scramble back aboard the ship to direct the evacuation was played again and again in broadcasts around the world.

In interviews, Schettino insisted he is no coward. He claimed he had to leave the capsizing boat before it was impossible to launch any more lifeboats and that in the darkness he didn’t see a ladder he could have used to climb back aboard.

The captain has depicted himself as a scapegoat. Five other defendants — two ship officials, a helmsman, the hotel director aboard and the director of the cruise company’s crisis unit — successfully sought pleas bargains. On Monday, the lawyers’ strike prompted the postponement of a hearing to announce their sentences, likely to be a fraction of what Schettino could get.

In Italy, defendants do not have to attend their trials. But Schettino’s lawyers have said he wants to show up for its formal start.

On Giglio, where residents depend on tourism and fishing for their livelihoods, the wreckage still mars the panorama from the island’s port. Salvage experts had originally predicted the ship could be tipped upright in an ambitious operation so towing could begin in spring of this year. But that timetable has slipped away.

The removal project involves some 400 workers representing 18 nationalities, including engineers and divers. On Monday, crews were busy securing some of the caissons being attached to one side of the crippled ship, which, the planners hope, will help the wreckage stay afloat when eventually righted so it can be towed to the mainland.

Islanders are impatient for the removal of the eyesore.

“We want our island back as it was,” Giglio’s mayor, Sergio Ortelli, told The Associated Press as he looked at the blue cove where he used to swim. Now, towering cranes and platforms of the removal team loom over the shipwreck.

Ortelli said authorities told the islanders the operation will begin in September to bring the wrecked ship upright again.

The island is still awaiting compensation for damages caused by the shipwreck, he said. “Our image was internationally damaged, and tourism figures have dropped off noticeably,” the mayor said.

Meanwhile, the remains of an Italian woman who was a passenger and of an Indian man who worked as a waiter have still not been recovered.

“The saddest thing is to pass by on the ferry and think that two bodies are still there, or will never be found,” said tourist Patrizia Giovanelli, who was making her second visit to the island.