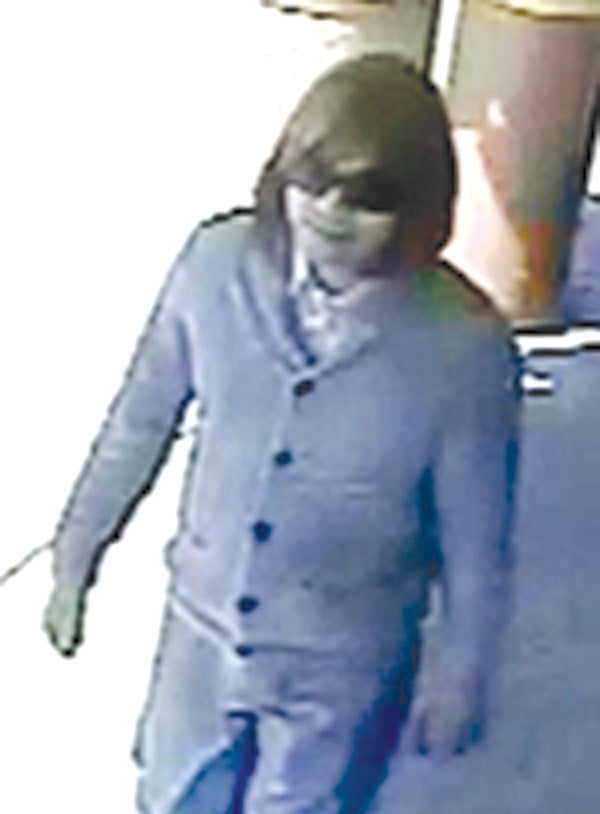 LOS ANGELES–The city is offering a $25,000 reward for information leading to the arrest and prosecution of a robbery suspect, who targets remittance companies that specialize in money transfers to the Philippines.

Los Angeles Police detectives said the suspect is believed to be an Asian male disguised as a female wearing a wig and sunglasses. Detectives have dubbed the suspect the “Asian Wig Bandit.”

According to police, the suspect walks into a remittance business, approaches the employees before pulling out a handgun and orders them to the ground. The suspect demands money and jewelry. In one incident, the suspect used a taser on an employee, police said.

“As far as the MO [modus operandi] is concerned, he enters the businesses by himself,” LAPD detective Freddy Arroyo stated. “He will either jump over the barrier and into the employee-secured area and commit the robbery. In some cases, with some of the businesses that do not have barriers, he’s able to just come across the counter and interact with the employee.”

The suspect is believed to be responsible for 15 incidents since December 19, 2012, LAPD officials said in a statement. Arroyo noted that because the suspect has stolen a combination of money and jewelry, the police is still not certain on how much damage was caused by the robber’s crime spree.

“This bandit presents a serious threat to the public,” said Mayor Eric Garcetti. “The city is offering an award to help capture this criminal. I want this bandit identified, caught and convicted before his crimes escalate.”

Police robbery detectives are asking for the public’s help in identifying the suspect, who is described as a male Asian, 25-30 years old, 5’ 9” in height, weighing about 160 to 180 pounds and wearing a blond or black shoulder-length wig.

The important thing to remember in identifying the suspect, Arroyo said, is the kind of car he drives. The suspect has been seen driving a BMW SUV (possibly an X5) with its color ranging from grey, silver, beige to light-colored. While Arroyo admitted that the police still haven’t pinpointed the identity of the suspect, he said there were “other things in play” with the ongoing investigation, but did not elaborate.

Arroyo reminded the public to immediately dial 911 if they spot an individual matching the description of the suspect. “Don’t intervene, don’t do anything that’s going to get you hurt. Call the police and let them know,” Arroyo said.

Arroyo said that any individual who comes forward with information on the suspect can claim a reward money, regardless of his or her immigration status. Any information could lead to the arrest and conviction of the alleged robber.

As far as confidentiality with the tipster goes, Arroyo said that the police department will keep in touch with the informant during the entire process, but will try to keep them from making a court appearance as much as possible.

“Immigration status has nothing to do with our case. We don’t care if the [informant] is in this country as a US Citizen, as a US resident, or if a person crossed into this country illegally yesterday. Our concern and what we want is the information so that we can stop this guy and put him behind bars,” Arroyo said.

Anyone with information concerning this case is asked to contact Detectives Freddy Arroyo or Daniel Jaramillo at Robbery-Homicide Division, Robbery Special Section, (213) 486-6840, during regular business hours (Monday to Friday, from 8 a.m. to 5 p.m.).  During non-business hours, weekends and holidays, contact the Detective Information Desk of RACR Division at the 24-hour, toll-free number (877) 527-3247.

To send cell phone text tips, text the word “LAPD” and your message to 274-637. To send web tips, log on to www.lapdonline.org and click “Anonymous Web Tips.” When providing information, refer to DR#1202-23311.