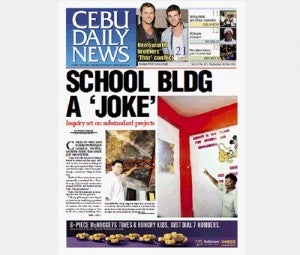 Cracks in walls and ceilings teetering on collapse. Wobbly, unstable floors that could give way anytime.

These were the structural defects found by school and barangay officials in the two-story building of the Toong Integrated High School and the barangay hall in barangay Toong, a mountain village in Cebu City.

Both of these structures were supposedly completed by a Zamboanga City-based contractor named MSDLR and funded by the Cebu City government.

Cebu City Hall ordered an investigation into the two projects.

It was built in early 2007 and students used it the following year.

Villamor said two to three students walking across the building’s second floor can feel it wobble and shake.

Three- to five-meter cracks are visible on the ceilings as well as the walls of the classrooms.

The third floor that houses the school’s computer lab is already slanting downwards and a single jump from a student will cause it to vibrate, Villamor said.

In 2009, the first floor sustained cracks. Villamor said they learned that the contractor didn’t install steel rods on the floor that caused it to crack open.

After being ordered by the city government, MSDLR replaced the broken floor.

Young served as the education consultant of former mayor Tomas Osmeña and reportedly oversaw construction of school buildings in the city.

Last February, an inspection team from the Department of Education’s (DepEd) engineering team inspected the school.

Villamor said the results of the inspection was never sent to them.

He said the inspectors confirmed defects on the construction of the school building.

The newly built third floor, which cost the city P700,000, is also showing cracks, have started to crack and shake, affecting the second floor of the multipurpose hall.

Barangay captain Teotimo Bacalso said the ceiling of his office in the second floor dropped to five inches because of the “substandard” construction on the third floor.

He said he already wrote City Hall’s Department of Engineering and Public Works(DEPW) to inspect the hall.

Bacalso said half of the third floor was built by Sercher Construction, a contractor tapped by the Department of Public Works and Highways (DPWH).

The other half was built by MSDLR and funded by the city government. The first and second floors were built by the DPWH.

The councilor, who chairs the city council infrastructure committee, said he will meet with the MSDLR and barangay and school officials to discuss the two projects at his office tomorrow.

“Based on their stories, one can see that the contractor didn’t follow the specifications of the programs of works,” Cabbarubias said.

Officials of barangays Sirao and Buhisan also came out with similar complaints, he added.

Cebu Daily News tried but failed to contact the MSDLR office for their side.

“I dont want to divulge more details for I am set to meet with the contractors yet. I might preempt them,” Cabbarubias said.

He said he will send inspection teams to verify the complaints in Toong.

He said he had yet to verify if it was also done by MSDLR.

Cebu City Mayor Michael Rama said he would order an investigation on the complaints of “substandard” projects in the mountain barangays of Toong, Buhisan and Sirao.

But Rama said it was too early to conclude that these projects were indeed substandard.

He said there is also a similar report about another alleged substandard project in barangay Busay.

“It has to be looked into seriously,” Rama said. The mayor said he wants to see if the contractor was paid in full.

If not, the city could always hold on to the retention fee required from project contractors, he said.

The team had yet to submit their report on the projects. With Correspondent Edison delos Angeles