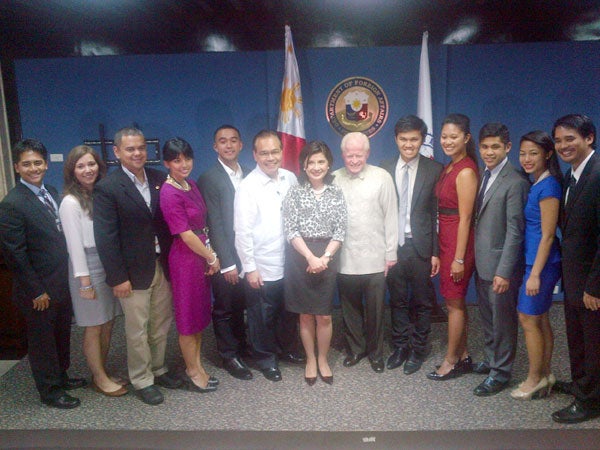 Philippines Ambassador to the US Jose L. Cuisia (sixth from right) poses with the second batch of delegates of the Filipino-American Youth Leadership Program organized by the DFA. Beside Cuisia are Ayala Foundation President Luli Heras de Leon (seventh from right) and Philippine Consul General to New York, Mario de Leon (eighth from right).

MANILA, Philippines – Top Filipino-American youth leaders from the United States (US) are in the country for an immersion program that will help them develop a stronger appreciation of the Philippines as well as to connect them back to their roots.

“The delegates were selected from all over the US based on their scholastic achievements, leadership skills, advocacy, and a sincere commitment to pay back to the Filipino community in the US and in the Philippines,” the Department of Foreign Affairs (DFA) said in a statement released Monday.

The Filipino-America Youth Leadership Program (FYLPro) of the DFA selected 10 exceptional young Fil-Ams who hail from eight states and one US territory, Guam.

Philippine Ambassador to the US Jose L. Cuisia Jr. told reporters in a media briefing that youth empowerment has been one of his major advocacies. It is for this reason that he started the FYLPro program just a year ago.

“I’ve made a point to meet with the next generation Filipino-Americans throughout my travels in the US visiting the vast Fil-Am community of around 3.4 million,” Cuisia said.

“[I want to] encourage them to become more active, [develop more] political engagement, [and be] more involved in the Fil-Am community,” he said.

The youth is the future

Randy Cortez, a 25-year old Program Specialist at the Office of Community Services in the Hawaii State Department of Labor and Industrial Relations, said in a short speech that the youth is the future of the country, quoting Philippine national hero Jose Rizal.

Speaking in Filipino, Cortez said that the FYLPro is a successful cooperation between the US and the Philippines. “We are really honored and privileged [to be a part of this],” he said.

Cortez, who is also the president of the JCI Hawaii-Filipino Junior Chamber, further quoted Jose Rizal saying “you will not reach your destination without looking back at your past,” to emphasize their connecting back to their roots.

Edward Santos, a 27-year-old consultant at School Professionals who previously volunteered as teacher of the non-profit organization Teach for America, said that he wanted to learn more about “the Filipino spirit that my parents always had.”

He said he wanted “to learn more about my identity, Philippine culture [and] social justice [to better] understand where I came from and where I wanted to go.”

Melissa Medina, a 24-year-old from Washington D.C. who works as the Liaison and Legislative Assistant Congressman Edward Royce, Chairman of the Foreign Affairs Committee in the US House of Representatives, said that he has gone to the Philippines once before on a business trip.

She said that because of the many beautiful sights she has seen and the opportunity she had to reconnect with her family and roots, “I can truly say it is more fun in the Philippines.”

Nico Barawid, a 23-year-old Economics Graduate of Yale University who is taking up his Master of Public Policy at the University of Oxford, said that he has been reading about the economic revival of the Philippines.

“What struck me most was the number of highrises [in the city], it helps concretize the notion of economic development in the Philippines,” Barawid told reporters.

Barawid, who was previously a delegate to the United Nations climate change conference and a founder of West African organization to fight environmental exploitation, said that he saw malls which also sell the same items that are in European countries.

“[it shows] the extent which the Philippines has become a modern society. The country should be extremely proud,” he said.

Rachelle Ocampo, a 26-year-old from New York who is a Health Educator at Queens Hospital Center, said that their recent visit to the Gawad Kalinga Enchanted Farm in Bulacan has opened her eyes to the need to bring back more Fil-Ams to the Philippines.

“[They should] not just visit, but to contribute, [establish] partnerships, and collaborate and network with them,” she said.

Ocampo is the President of the Pilipino American Unity for Progress Inc. and has a master’s degree in Education, Science and Public Health from the SUNY University in Buffalo.

Asked what their best and worst experiences so far about the country was, Bea Querido, a 27-year-old who works as a Supplier Management at the Boeing Company, said “a lot of amazing things, [you’ve got] really, really good golf courses [and the] worst [experience] is traffic.”

Querido previously worked at Lockheed Martin and the US White House and is pursuing her Master’s degree in Engineering for the Massachusetts Institute of Technology-Zaragoza Logistics and Supply Management in Spain.

Anthony Guevarra, a 36-year-old a Senior Loan Officer at Affiliated Bank Mortgage, said that the best for him is the people. “It keeps me coming back.”

“I don’t see the bad things, it’s hard to see that, even if there is poverty, there is so much beauty that overshadows that,” Guevarra, who founded the Filipino American Council of South Texas Youth Group and was formerly the president of the Philippine Student Association of Texas A&M University, said.

Also among the delegates are:

-Julien Baburka, a 26-year-old Policy Advisor for Illinois Governor Pat Quinn. She has a master’s degree in Public Administration from the University of Illinois where also served as Vice President of the College Democrats.

-And Dennis Rodriguez Jr., a 34-year-old who is in his second term as Senator in the 32nd Guam legislature and is also a member of the Board of Trustees of the Filipino Community of Guam.

The delegates are also scheduled to visit the Ayala Museum in Makati City, the Gawad Kalinga Enchanted Farm in Bulacan, and a tour of the Cultural Center of the Philippines.

They are also scheduled to meet with top Philippine government officials such as Vice President Jejomar Binay, Senators Francis Escudero and Teofisto Guingona, Presidential Communications Development and Strategic Planning Office Secretary Ricky Carandang, and the Speaker of the House of Representatives.

They will also get a chance to meet with heads of private companies including Joey Concepcion, president and CEO of RFM Corp. and founding trustee of the Philippine Center for Entrepreneurship, Manuel Pangilinan, chairman and CEO of the Philippine Long Distance Telephone Company and Meralco, and the Makati Business Club.

“The FYLPro aims to tap these outstanding Filipino-Americans, whose civic involvement and advocacy of causes could contribute to advancing important issues in the Fil-Am community and the further development of the Philippines,” DFA said in a statement.

Read Next
DFA: Chinese ships ‘going back and forth’ in Panatag Shoal
EDITORS' PICK
PH detects local transmission of Omicron subvariant BA.2.12.1
OVP: Pilot’s claim vs Robredo ‘never happened’, a ‘malicious fabrication’
Petition to reverse Comelec decision on Bongbong Marcos’ DQ case reaches SC
House energy committee chair Arroyo bats for cheap electricity
Luxe property: A way to build, preserve wealth
Honolulu Café is the cure for your Egg Tarts and Roastings cravings
MOST READ
Heart Evangelista gets a ‘no’ from Chiz Escudero after asking, ‘Do I deserve a bag?’
Congress canvassing of votes for president, VP to begin May 24
Man posing as Marcos spox revealed to be an inmate in Bilibid — Guevarra
Leni and the future of the Pink Movement
Don't miss out on the latest news and information.

newsinfo
PH detects local transmission of Omicron subvariant BA.2.12.1
newsinfo
OVP: Pilot’s claim vs Robredo ‘never happened’, a ‘malicious fabrication’
newsinfo
Petition to reverse Comelec decision on Bongbong Marcos’ DQ case reaches SC
newsinfo
House energy committee chair Arroyo bats for cheap electricity
business
Luxe property: A way to build, preserve wealth
pop
Honolulu Café is the cure for your Egg Tarts and Roastings cravings
entertainment
Heart Evangelista gets a ‘no’ from Chiz Escudero after asking, ‘Do I deserve a bag?’
May 17, 2022
newsinfo
Congress canvassing of votes for president, VP to begin May 24
May 17, 2022
newsinfo
Man posing as Marcos spox revealed to be an inmate in Bilibid — Guevarra
May 17, 2022
opinion
Leni and the future of the Pink Movement
May 17, 2022
newsinfo
CebuPac places pilot under disciplinary review after ‘baseless’ post vs Robredo
May 17, 2022
newsinfo
Marcos DQ petitioners told: ‘Learn to respect will of the Filipino people’
May 17, 2022