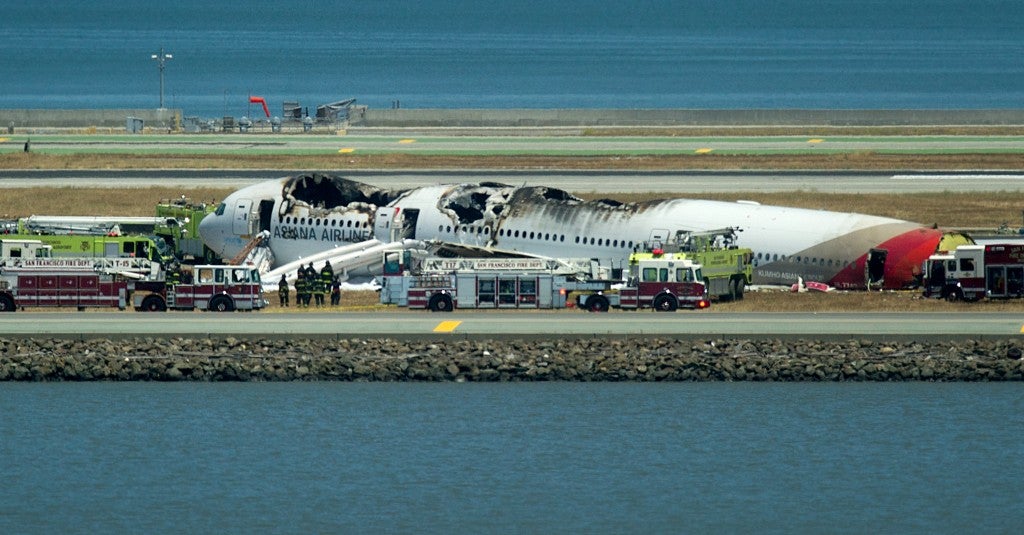 Fire crews respond to the scene where Asiana Flight 214 crashed at San Francisco International Airport on Saturday, July 6, 2013. Asiana Airlines may continue flying into the Philippines while the country’s air safety officials are waiting for the results of the investigation of the crash of one of the carrier’s planes in San Francisco, California, on Saturday. AP PHOTO/NOAH BERGER

MANILA, Philippines—Asiana Airlines may continue flying into the Philippines while the country’s air safety officials are waiting for the results of the investigation of the crash of one of the carrier’s planes in San Francisco, California, on Saturday.

Deputy Director General John Andrews of the Civil Aviation Authority of the Philippines (CAAP) said that if a problem with Asiana’s Boeing 777 was found to be the cause of the crash, it would have negative implications for the plane’s manufacturer and the airlines operating that type of aircraft.

“Only two areas to be looked at: man and machine. It should not be difficult as the CVR (cockpit voice recorder) and FDR (flight data recorder) have been retrieved,” Andrews said.

“If machine is the cause, there is possibility of worldwide grounding of Boeing 777,” he said.

Philippine Airlines, which flies daily flights to San Francisco, said none of its flights would be diverted, as San Francisco International Airport has several runways.

In a statement posted on its website, Asiana Airlines said its Flight OZ214 departed from Incheon International Airport in South Korea at 4:35 p.m. on Saturday.

The plane crashed as it was landing at San Francisco International Airport on Saturday morning.

“Asiana Airlines is currently investigating the specific cause of the incident,” the airline said.

The airline said it was also assisting passengers who had been injured in the accident.

Asiana said it would cooperate with investigations by governmental agencies.

Asiana Airlines, which had 79 aircraft at the end of 2012, operates on 14 routes in South Korea and on 91 international routes to 23 countries.

The Philippine Embassy in the United States said in a post on Twitter that it had no information whether the crashed Asiana plane had Filipinos on board.