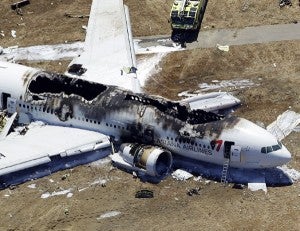 This aerial photo shows the wreckage of the Asiana Flight 214 airplane after it crashed at the San Francisco International Airport in San Francisco, Saturday, July 6, 2013. AP

MANILA, Philippines — Philippine air safety officials are awaiting official investigation results of the National Transportation Safety Board (NTSB) of the United States after an Asiana Airlines flight carrying 291 passengers  from South Korea crashed upon landing at San Francisco International Airport on July 6 ( San Francisco time), a top official said. Two deaths have so far been reported by US media outlets.

In the meantime, Civil Aviation Authority of the Philippines (CAAP) deputy director-general John Andrews said Asiana Airlines could continue flights to the Philippines. The South Korea-based carrier flies to the country through hubs in Manila, Clark and Cebu, according to its website.

Andrews said that if the aircraft, a US-made Boeing 777, was found to be the cause, it could have negative implications for the manufacturer and airlines operating these aircraft, which include flag carrier Philippine Airlines Inc.

“Of course we will wait for the NTSB report if and when it can be completed,” Andrews, a former Philippine Air Force pilot, said in a text message.

“Only two areas to be looked at:  man or machine. It should not be difficult as the CVR [ cockpit voice recorder] and FDR [ flight data recorder] have been retrieved,” he added. “If machine is the cause there is possibility of worldwide grounding of Boeing 777s.”

Philippine Airlines, which mounts daily flights to San Francisco, said none of its flights would be diverted from the airport with several runways.

“Our PAL SFO flight arriving at 11:00 Manila time ( 8:00 p.m. SFO time) is proceeding as airport opens two runways,” Philippine Airlines spokesperson  Cielo Villaluna said in a text message. She added that the airline did not anticipate any diversions for the rest of its flights this week.

In a statement posted on its website, Asiana Airlines said flight OZ214 departed from Incheon International Airport in South Korea at 4:35 p.m. on July 6 ( Korea time).

“Asiana Airlines is currently investigating the specific cause of the incident as well as any injuries that may have been sustained to passengers as a result,” the airline said in its statement.

“Asiana Airlines will continue to cooperate fully with the investigation of all associated government agencies and to facilitate this cooperation has established an emergency response center at its headquarters,” it added.

Asiana Airlines, which had 79 aircraft at the end of 2012, operates 14 routes in South Korea  and 91 international routes over 23 countries.