Tarsier, ‘icon of PH tourism’, sought out as pets—foundation 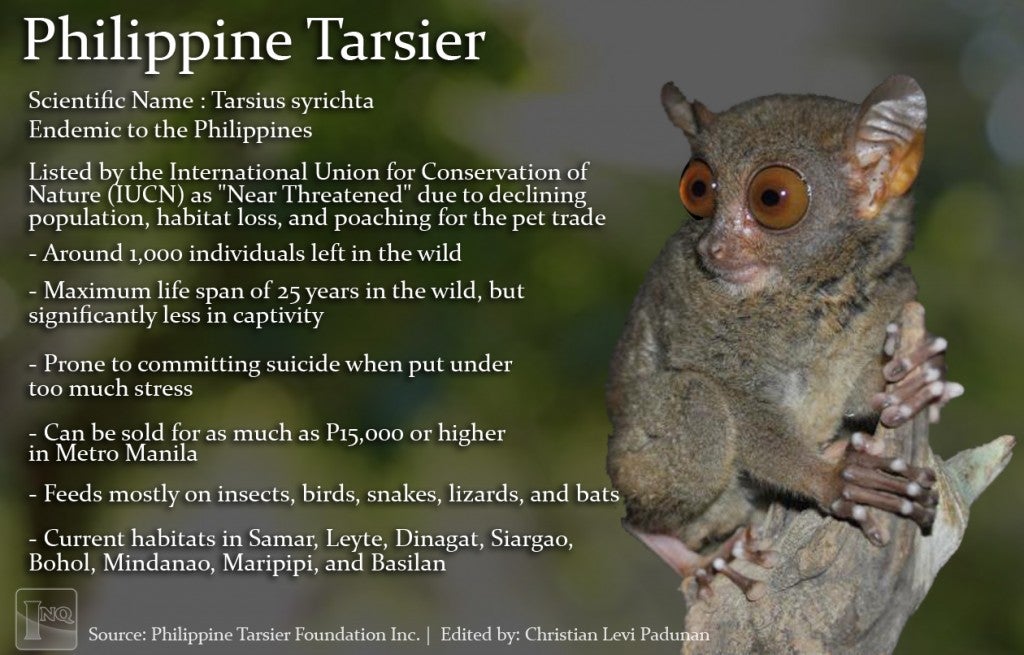 MANILA, Philippines –The fame of the Philippine tarsier is driving people to want to take them from their natural habitat and make them their pets, the Philippine Tarsier Foundation Inc. (PTFI), said Friday after a second rescued tarsier in Quezon City died.

PTFI Program Manager Joannie Mary Cabillo said in an exclusive phone interview with INQUIRER.net that “the tarsier is becoming very famous, it’s an icon of tourism, and an icon of the Philippines.”

“People become interested to have them as a pet [and] because of this there are many poachers who sell them to interested buyers,” she said.

The Protected Areas and Wildlife Bureau (PAWB) said that they rescued Tuesday another tarsier that was put inside a baggage in a bus terminal in Quezon City.

The tarsier died Thursday. The cause of death was still not clear but PAWB Director Mundita Lim said it was not eating much when they took care of it.

A tarsier was rescued in the Manila Golf and Country Club in Makati City last June 22 but died five days later.

Cabillo said that the people who brought these tarsiers from their natural habitats in the Visayas and Mindanao region could be to either sell them or keep them as pets.

“There are places where you can get tarsiers, not just in Bohol but also in Mindanao. There could not possibly by any place in Manila where it can thrive [so it will likely be for the] pet trade,” she said.

“That’s the only thing we can think of, it’s something which money is involved,” Cabillo added. “[Tarsiers are] very very popular, that’s why they’re there [in Manila], that would not happen if they’re not popular.”

More useful in the natural habitat

The Philippine tarsier (Tarsius syrichta), which is endemic only to the country, is more useful if they are kept in their natural habitat, Cabillo said, citing the benefits of eco-tourism to the country.

“The Philippines is very lucky to have the tarsier and that’s one of the reasons why we are famous,” she said.

“Don’t take them as pets, they’re very boring animals to be kept as pets. All day they just sit around and sleep and at night they like to travel and hunt,” Cabillo added, citing their nocturnal nature.

Government officials should be tighter in the enforcement of environment and wildlife regulations. She said that tarsiers were not the only endemic species in the Philippines being poached.

The International Union for Conservation of Nature (IUCN) lists the Philippine tarsier as “Near Threatened” due to population decline over the last 20 years, habitat loss, and “harvesting for the pet trade.”

“It is heavily harvested as food and especially for the pet trade. This is illegal, but there are recent anecdotal reports that the pet markets in Manila are being flooded with tarsiers retailing at less than P500 per individual,” the IUCN said on its website.