MANILA—Narcotics syndicates prefer Filipinos to transport illegal drugs for them because many of them go abroad to work, Justice Secretary Leila De Lima said Thursday.

“We have so many overseas Filipino workers,” De Lima said, announcing that she has directed the National Bureau of Investigation to hunt down the recruiter of the 35-year-old Filipina drug mule who was executed on Wednesday in China. 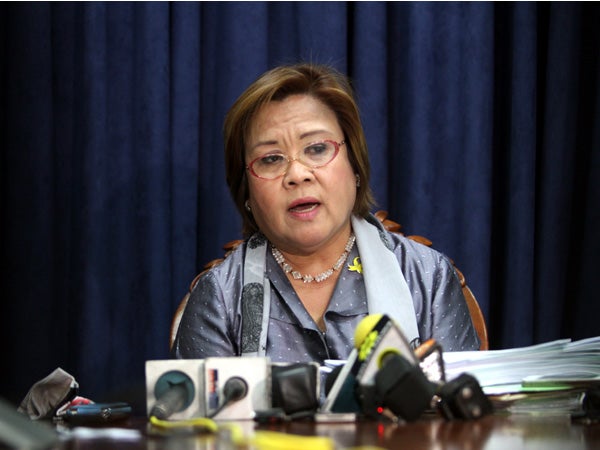 “We are a sending country,” De Lima said, noting there are currently about 10 million Filipinos overseas.

De Lima told reporters that the “big implication” of the case was that a drug syndicate was involved here.

The woman was arrested with her male cousin in 2011 at the Hangzhou international airport, each of them carrying more than six kilos of heroin.

“They could have not done it on their own if the amount of the cocaine or drugs  alleged to have been trafficked is such. So they were just used by these syndicates,” the justice secretary said.

She expressed hope though that the woman’s family would go to the NBI and coordinate with them “because they might have information or leads that can be used.”

The execution of the woman brought to five the number of Filipinos put to death by Chinese authorities for drug trafficking.

Three Filipinos — Sally Ordinario-Villanueva, Ramon Credo and Elizabeth Batain —were executed on March 30, 2011 for attempting to smuggle heroin into China. A fourth Filipino was executed in December 2011.

The male cousin of the woman executed on Wednesday was also sentenced to death but was given a two-year retrieve to give him a chance to reform so his sentence could be commuted to life imprisonment.

De Lima said she pointed out the predicament of OFWs when she spoke at the 5th World Congress Against Death Penalty in Madrid, Spain last month.

She said the Philippines signified its interest  in joining the global advocacy against the death penalty “because some of our countrymen are put in that kind of situation and happen to be in countries where the death penalty is imposed.”